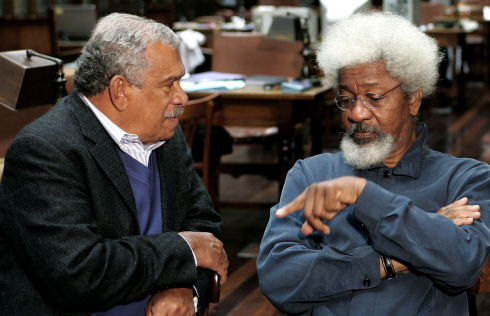 In a statement titled: ‘Derek Walcott embarks on the eternal sea’, Soyinka wrote:

“Derek Walcott was the lyrical heart of the Caribbean, yet wide and profound as the sea that washed his island shores. I visited him at his home, envied his splendid isolation and affinity with the sea. He had a small eyrie where he shut out the world, wrote and painted the crags and iconic promontories that jutted out of the waters, seeming to duplicate his lone splendour amidst the restless sea.

“We have sailed and picnicked together through the stunning grottos that lie hidden in the Caribbean. He railed and lamented with us under our recurrent cycle of brutal and incontinent misrule of dictators, joined in activities against our seeming curse. Not many people know this, his constant bewilderment at the irony of replication of Master-Slave relationship that took his ancestors to the Caribbean, now mimicked by black overlords. Yet he never lost his interior call of the universal, and of history, as captured so magisterially in his grand oeuvre, Omeros. Derek was one of the history driven lyrical kind..

“It is no partisan or excess zeal that prompts me, at every opportunity, to claim Derek Walcott as one of the greatest poets, in any language or culture, of the twentieth century. Derek had a great feel for Nature and History, within whose matrix he so lyrically situated and wove his island tapestry.. A mordant wit, even sometimes prankster, Derek was unpretentiously an aristocrat of letters. His Muse was the sea, but he celebrated his continent of ancestry, Africa, as his rightful bequest, without sentiment, and without blindness.

“The sadness of parochial literacy on this vast continent comes from the presumption that affinity between writers and their works must be found and expressed in the narrowness of geographic neighbourliness. Those who wish to speak knowledgeably of the reaches of African Literature, should learn to look beyond saline waters, and dialogue with the spirit of Derek Walcott.. He is alive, remains alive, and keeps the universal lure of literature alive.”