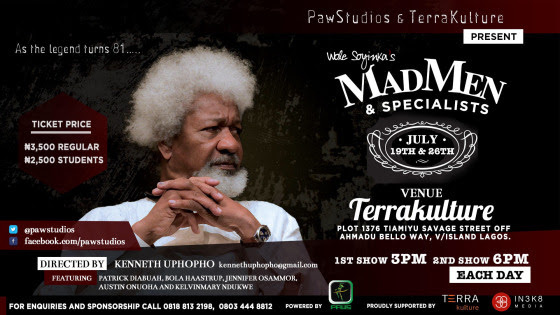 Soyinka’s book titled Madmen and Specialist has been reproduced into a play and will show at Terrakulture on July 19th and 26th.

Madmen and Specialists is set in the aftermath of the civil war and the resultant debilitating effect on the citizenry as civilians or military.

Bero a doctor left his practice to participate in the war, with his father, who also left for the war to work with the injured and recuperating soldiers at war. Contrary to Bero’s instructions, his sister; Si Bero, enlists the support of two women traditional healers; Iya Agba and Iya Mate, to help continue the practice of her brother.

Iya Agba and Iya Mate have come to do as Si Bero requested, but on one condition that upon Dr Bero’s return from the war, he will continue the practice so that their knowledge will not go to waste.

The intrigues, suspense and emotive play throws up questions such as this; ​What happens when the only obstacle to your ambition is your father? What happens when a sacred pledge cannot be kept? Madmen and

Specialist exposes all of these and other intriguing issues.

Madmen and Specialist is directed by Kenneth Uphopho (Director of the critically acclaimed Saro the Musical and Single in Gidi), and features Patrick Diabuah, Bolanle Haastrup-Atitebi, Jeniffer Osammor, Austin Onuoha, and Kelvinmary Ndukwe, amongst others.