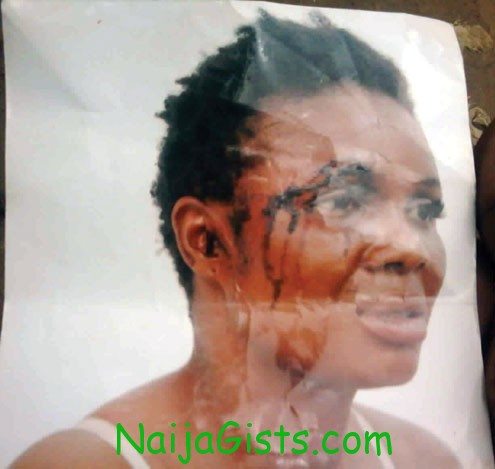 June 12, 2012 – Woman Arrested For Attempting To Kill Self, Husband

This is one of a kind heartbreak story.

The woman in the above picture, Bukola Abiwa has been arrested and jailed for attempting to kill herself and her husband, Sunday Onayiga with a knife in Lagos state, Nigeria. naijagists.com

Frustrated Bukola decided to commit the murder after her hubby told her to pack out of her unofficial matrimonial home located at  3, Bassey Street, Orelope area of Egbeda, Lagos.

The angry woman insisted that he must marry her because he promised to marry her two years ago.

The Ondo State-born woman expressed her frustration when Sunday broke the news to her that he was no longer interested in the marriage.

She reportedly hit his head on a wall and took a kitchen knife and pursued Sunday to the Police Station at Idimu to kill him.

The police arrested her and charged her to court for attempted murder and conduct likely to cause breach of public peace.

The embittered woman lamented at the open court that he has used her for two years and now wanted to dump her for another woman.

She is facing a two-count charge of assault and conduct likely to breach public peace.

Narrating her ordeal, Sunday said he met her at Ikotun area and told her that he loved her and wanted to marry her.

He said before he met her, she was living on her own and he asked her to come and live with him and promised to meet her parents.

Bukola  said that she started living with him as his wife not knowing he had another thing in his mind.

She said that she was shocked when Sunday told her that he no longer loved her and that the marriage had been cancelled.

According to P.M report, her husband Sunday decided to quit because she was troublesome and could not manage her as wife. Bukola was later charged to court for the offence. She pleaded not guilty and the presiding Magistrate, Mrs. M. B. Folami granted her bail in the sum of N250, 000 with two sureties in like sum.

Bukola has been remanded in prison custody at Kirikiri,  Lagos, because she could not meet her bail conditions.