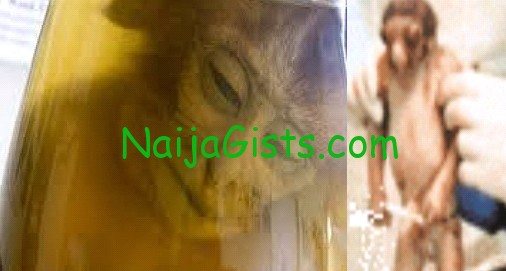 Do you remember the story of a woman who delivered a frog-like baby in Ekiti State last year? Another shocking discovery has been made in Benue State Nigeria after a hunter’s wife delivers a monkey-like monster baby.

Residents of a small city of Otukpo in Benue State, Nigeria were surprised to discover that the wife of a popular hunter in the town has delivered a monkey-like monster baby at St Theresa Hospital.

The hunter’s wife from Oju LGA of Benue state who already had 9 other healthy children gave birth the creature few days back.

Several residents rushed to the hospital to see the bizarre creature for themselves.

According to Dr Stanley Bwala, the medical director of St Theresa hospital, the malformation could have been prevented if the woman had attended antenatal care regularly.

We learnt the farmer rushed to the hospital to remove the monster baby as soon as he heard of it.

It’s a popular belief that abnormal child birth was a usual occurrence to hunters who have killed several animals during hunting.

In a brief chat with elder Adah Okoh, a traditional ruler in the area, he noted that in the Idoma tradition, such child should not be allowed to stay with the mother for fear of reincarnation.

Asked if the monster should be buried alive or killed, elder Okoh said that should be left for the family to decide.