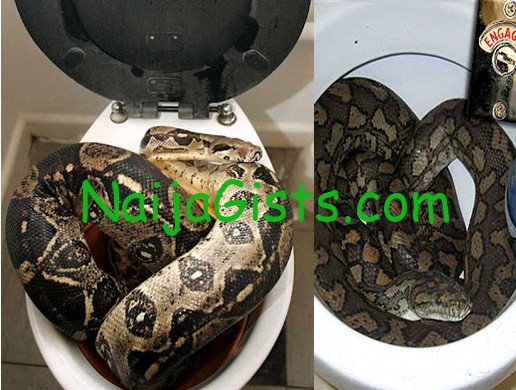 A 74 years old woman recently got the shock of her life when she discovered a big live Python Snake taking a nice rest in her toilet bowl in Germany. naijagists.com

The woman found the live python as she lifted up her toilet cover to sit.

She immediately alerted Police authority who after an unsuccessful attempt to flush the snake from the toilet call the fire brigade.

A manhole was opened from the garden and the snake was removed from the plumbing system. 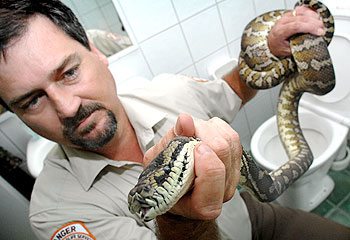 According to a snake expert on the scene, the 2-year old snake was identified as a royal python which is often not dangerous to humans.

What would have happened if this woman were to have sat without noticing.

As from this moment, let’s all watch out before we sit on toilet bowls.

You never know what you’ll find.

What To Do If You Find Snakes In Your Toilet / Bathroom

According to research, Since the toilet in use is sealed with little water between the inside and the outlet, water reptiles like Python Snakes, frogs, rats or worms can swim and make their way through it into bathrooms, it’s essential to know what to do in such emergency situation.