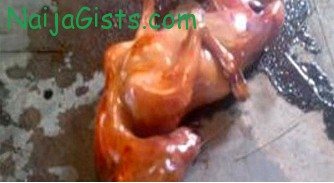 New details have surfaced regarding the mysterious birth of a horse-like baby during a prayer program at World Liberation Ministry in Benin City, Edo State Nigeria on Tuesday the 11th of Sept 2012. naijagists.com

According a source from the church, the married woman was childless for 11 years.

Mrs Veronica Egiebor who witnessed the strange birth said the woman was a vegetable seller who sent her boyfriend to school with proceeds from her business.

After they announced their marriage, her boyfriend’s mother turned against it causing the relationship to break apart.

The man got married to another lady while the woman in question also got married few years later.

Veronica Egiebor said the GO of the ministry, one Evangelist Silva Iyamu asked the woman during the prayer session if she’s pregnant and she responded affirmatively.

The woman confessed she often feel she’s not carrying any pregnancy.

The GO later asked the woman if she wanted to visit the hospital for evacuation and she said no.

Her reply is what made the evangelist to begin the spiritual exercise.

She added: “Then, the evangelist asked four women to donate their wrappers to form a fence around her. He asked the men to move to the back of the auditorium. He told the congregation that the matter was a women’s affair.”

Egiebor stated that Iyamu poured anointing oil on the woman, sprinkled her with sachet water and directed the congregation to pray fervently.

Before long, she said, the woman felt uncomfortable and went into labour.

Egiebor said: “She held somebody’s leg with the clothes as she pushed harder for the baby to come out. Then, something dropped and she fell. The thing fell, some people called it a goat but it looked like a horse. It has a long neck and the ears were long. It was exactly like a horse, although it was in a baby form.”

After the strange birth, Iyama warned the congregation to take their eyes off the bizarre creature a warning which made several church members took to their heels.

We learnt the woman in question has left the church because of shame.

“I am sure the woman is ashamed. God has done a good job in her life and she is ashamed. But I am sure she will come back. The dead creature was left for a while for people to see.

“This morning (Wednesday), the people ordered that they should throw the creature away because it was becoming an embarrassment. Evangelist Iyamu has launched a manhunt for the woman.” said Prince John Ogbovoh, PA to the General Overseer

A consultant Gynaecologist, Dr Jerry Uwaifo who is the Medical Director of Central Hospital in Benin City said:

“A woman can give birth to a deformed child but not animal.

“How come they didn’t bring her to a reputable hospital so that it can be verified? God does not perform a miracle in that way. He will not allow a woman to deliver a horse.”