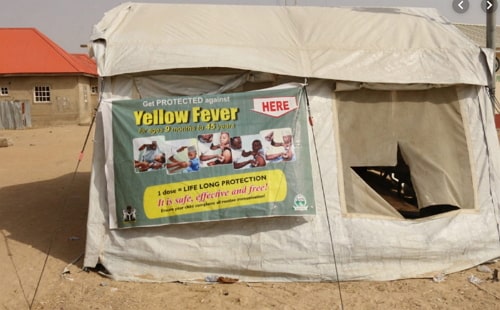 Ebonyi state Government has confirmed the untimely death of 16 people from a yellow fever outbreak in the state.

The Permanent Secretary Designate of the State Ministry of Health,Dr Chris Achi, who confirmed the development to newsmen on Friday in Abakaliki, stated that the outbreak occurred in Ndungele community of Izzi Local Government Area (LGA) of the state.

Achi said that outbreak occurred since July 15, but was not reported early to the health ministry leading to the death of 16 persons before the ministry’s intervention.

“A member of the community called me one early morning to report deaths of indigenes in the community with the victims dying of same symptoms.

“I informed our health workers and members of the state Rapid Response Team (RRT) and when they got there, they discovered a case of yellow fever with symptoms of yellowish eyes, skin, among others.

“We then moved into the community, notified the Federal Ministry of Health and National Centre for Disease Control and they have been in the state for about two weeks.

“They came with drugs, vaccines and other interventions as some of the patients who could not be managed in the community’s health centre were moved to the General Hospital Iboko,” he said.

The permanent secretary said the victims were also taken to the South-East Virology Centre in Abakaliki where the samples taken further proved that they died as a result of yellow fever.

He also spoke on some of the steps so far taken by officials of the state government to stem the spread of the outbreak.

“We have adequately sensitised the people that such disease is not treated in herbal homes but in hospitals and that was why it spread rapidly.

“It is also good for people to aware of events around them as the disease could have been difficult to curtail if it had spread to the urban centres,” he said.

He noted that the people had been sensitized on preventive measures about the disease which is caused by a type of mosquitoes called `Aedes Aepyti’ found in the tropics and sub-tropics.

“It is transmitted from person to person through mosquitoes although there are forest monkeys that transmit it.

“When the mosquitoes bite monkeys and bite someone in the forest, it will transmit the virus and if it bites another person, the transmission will continue,” he said.

Achi revealed that the disease often manifests fever, typhoid among other symptoms and if not detected on time, will affect the blood and the victims will experience renal failure and possible coma,” he said.