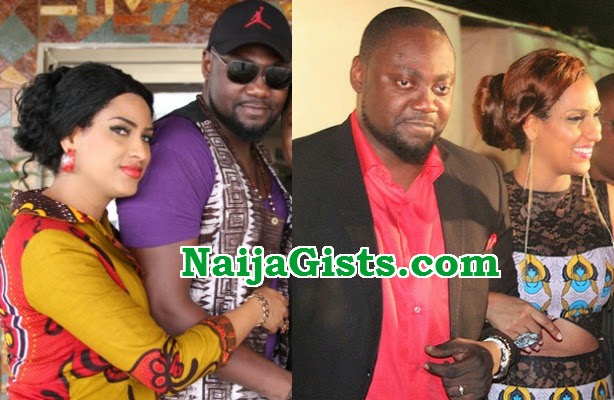 Nollywood actor Yemi Blaq recently had a one on one chat with Ademola Olonilua where he discussed at length about his wife and his rumoured romance with Ghanaian actress Juliet Ibrahim.

Is Juliet Ibrahim one of your girlfriends?

No, we never dated. She is my friend and I met her after she got married. We never met physically until one time in Abuja when we were shooting an action movie, Covet Operation. That was the first time we ever met. After that, she called me that she was shooting a movie in Ghana and that she wanted me to be a part of it. I agreed. She is a nice person, her sister is nice and I like her mother a lot. We just became friends. There was a picture that was taken for the publicity of a movie we did together where she played my wife. The picture looked like we were in love and were getting married. A blog picked it and said we were getting married and other bloggers just feasted on the story. There was a time I read somewhere that I said if I was not married, I would have married Juliet Ibrahim. I laughed about it and called her. We both had a good laugh about it because I never said anything like that. I have never wanted to marry her; we have a great platonic relationship. It has never been anything beyond that.

I learnt you met your wife on the set of her movie?

Yes it is true. My wife is a producer and a writer. I got a call from someone to feature in the movie and I accepted. It was while I was just starting out in the industry. I went to audition for the movie with my friend and we both got the part. From there, I started talking to my wife and our relationship blossomed.

What was the basis of attraction?

For me, it was the talent. My wife is extremely talented and she is very beautiful. I am not saying this because she is my wife but she is extremely intelligent and creative. I am attracted to talents a lot, I like being around creative people. She is extremely good at what she does.

Is it true that there was a time she was shooting a movie and she asked you to kiss Mercy Johnson passionately?

Yes, it was with Mercy Johnson and Rita Dominic. I did not feel somehow because we both studied Theatre Arts and we are professionals. After the first scene, she called me to a corner and reminded me about what we discussed while discussing the script. I was with her when she wrote the script and I gave her the name of the movie, The Distance Between. She said that we spoke about a certain degree of passion for the characters and that she was not seeing any. She told me that I had to do it properly and I obliged.

After the passionate kiss with two actresses in your wife’s presence, didn’t she act funny after the movie?

It was never mentioned again until I brought it up during a chat with somebody.

If your wife decides to become an actress, would you support her?

It is not a question that is hard for me to answer. It is never going to happen. My wife is very camera shy. She is very pretty and even before she started writing, she had been approached to model and also act but she turned it down. She would never become an actress even though I believe she is a brilliant actress. She is a marvelous character coach but she is very camera shy. It is never going to happen.

What measures have you put in place to make your marriage enduring?

There is really nothing one can do to be able to forestall anything other than to live a good life and be true to oneself. If you care about someone, show them that you care about them and commit to it. There is no magic to it, hard work is needed.

You and your wife are mostly on location, how do you find time for each other?

We try and find some balance. There are times that I can be home for over a month and I am not really doing anything apart from writing. At those periods, I make sure I create time for my family. I spend a lot of time with my family. I would have also cook       but my wife is a fantastic cook. Her mother is a caterer.

But you seem like the type of person that loves partying…

On the contrary, I don’t like going out. I hardly attend parties and I don’t go to clubs. Even when I was single, I hardly went to club because I don’t really sleep well at night. I have a mild insomnia. It is my nature and I got it from my mother. Some nights I sleep well and most nights, I hardly sleep. Because of that, I hardly go out. I love dancing. Once in a while, people insist on taking me out and I make them know I have to be back to my room early.

I learnt there was a time a lady came to your hotel room naked?

Yes it happened. I was in the hotel drinking some wine with my friends and where I was, I could not easily access the door. All of a sudden, there was a knock on the door and I asked the person closest to the door to open it. When he did, he gasped as if he had seen a ghost. I asked what happened and all he could say was, “she no wear clothe oo.” I wonder why the lady did that.

Nothing actually, I asked her to leave. It is hard to shock me, I am one of those people that don’t like collecting gift from people. I am not the type that does something that is wildly emotional.

Women are known to like guys that show emotion, how has your wife been coping?

It is something she has learnt to deal with over time. I told her actually, we spoke about it and she understands my nature. We make a joke out of it all the time. I feel good inside, I appreciate it and like what has been done to me but I don’t know how to show overt emotion.

How have you been coping with persistent female fans?

It is something I learnt to handle even before I started acting. It is not a big deal because I have never lacked female attention. As long as someone does not hold a gun, there is no problem, we would just be smiling and making the conversation civil.