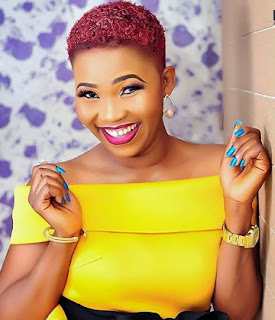 Can you tell us briefly about yourself?

My name is Yewande Adekoya Abiodun but people call me Kudi Kelepto based on the role I played in the movie of the same title. I am from Ijebu-Ososa in Ogun State. I am a graduate of Mass Communication. I am an actress and filmmaker. I am happily married with children.

As a graduate of Mass Communication, why did you choose to be an actress and filmmaker?

In what year did you venture into film fully?

I actually started in 2002 with Alpha-Bach Music and Theatre Group, but we were into stage performance. From there, I produced my first movie, Life Secret in 2006. And things started taking good shape, until I moved into Yoruba movie making through a friend who suggested that I could win more fans if I joined the Yoruba movie sector. And since then I started making Yoruba movies. Not that I cannot make English movies, I can but I think I have this flair for Yoruba movies because through them I can connect more with my fans.

Since your first movie in 2006, how many movies have you produced till date?

Oh, do you want me to start counting? (Smiles). I am going to lose count if I do because I have produced lots of movies. But I will mention the major ones like Igbo Dudu, Omo Elemosho, Emere, Kudi Klepto, Kurukuru, Irubo, Tamara and the popular Iyawo Adedigba, which was released recently.

We have a lot of people in the industry who are equally married and they’ve been able to manage and balance their homes and careers as well. So, there is nothing so special about that. At least, we have the likes of Aunty Joke Silva and her husband, Olu Jacob, who have been married for so many years. And I think being married to a colleague has actually helped me. We both understand each other and we both have the support of our families from day one.

What is your opinion about actors marrying each other but breaking up in quite a short time?

It happens in all sectors like banking, health etc. I don’t like it when people say filmmakers’ marriages always break up. No, I don’t like it. It is because we are in the limelight.

How would you compare the English and Yoruba sectors of Nollywood?

I do more of Yoruba movies for now but I think we are both doing fine. I think we are producing better movies in the Yoruba sector of the industry. We have more talents springing up and more learned people coming into the industry. The English sector is doing perfectly well too, with superb movies and productions. I will say Nollywood generally is doing great.

Who are your role models in Nollywood?

I don’t really have role models but I admire a lot of veterans like Omotola Jalade-Ekehinde, Geneveive Nnaji, Joke Silva, Funke Akindele, and Fathia Balogun Williams because they have really tried and proven themselves. I really admire their strengths and all they have achieved for themselves in Nollywood.

You are not often seen at social gatherings, don’t you have cordial relationship with your colleagues or you just don’t like to party?

I am not really a party or social kind of person. So, for me, if I am not on set working, I’ll rather be at home enjoying myself, perhaps readings books, watching movies or writing stories. I’m more of an indoor person. But once in a while I do go out but not as much as people want me to. My husband goes out a lot; he’s more of a social person than myself.

Which of your productions is the most expensive and challenging?

Wow! Iyawo Adedigba is the most challenging and most expensive of all my productions. It cost me millions of naira to produce. It was produced in partnership with IrokoTV and released into the cinema in June 2017, and on IrokoTV in August 2017. It was released on DVD a few weeks ago and doing pretty well in the market.

Nigerian Bride Who Went Bald For Wedding Forced To Wear Wig In Uyo Church [PHOTOS]
Oma Nnadi: My Husband Noni Enem & I Started Our Relationship As A Joke