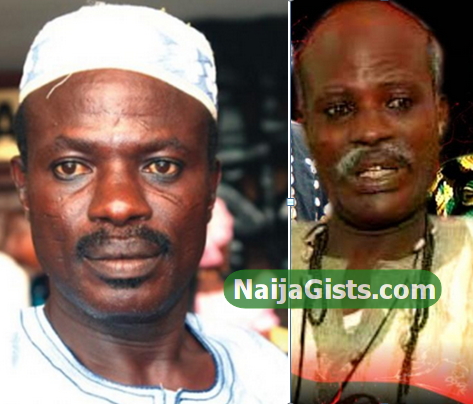 Veteran Yoruba actor Abija wara bi ekun real names Tajudeen Oyewole who became popular for his role in cultural movies is back on his feet after a serious car accident that incapacitated him for years.

After battling a severe stroke that left him bedridden for about 3 years, Abija is happy to have survived.

The actor who claims the accident was a form of spiritual attack has released a new movie.

Hear what the actor said in a recent interview;

You have not been visible in the movie industry for sometime. What happened?

I did not disappear intentionally. I had an accident while coming back from a location in Osogbo in 2007, and that slowed my pace. After that incident, I was bedridden for about three years, but I got up miraculously and started using a walking stick. But I am fully back now. People did not want me to get up but God is beyond them all. Many people came to sympathise with me, thinking that I would be bedridden all my life, but I can assure them all that I will see their end.

Are you really back to acting?

I am back for real, to act. I am an actor and that cannot be faulted. Ibinu Abija was the film I was shooting when I had the accident and I have just finished work on it. It will be released soon by Toymax Ventures. Afterwards, there are going to be many more movies from Abija – that is an assurance.

Is it true that the incantations you make in movies are unreal?

I will like to state that the belief of everybody is that anything that is counterfeit surely has an original version and you cannot have the counterfeit without seeing traces of the original in it. There are some people who God has put in charge of this earth and it is possible that when we get to some places, we fail to address them properly. As such, we appease them and ask them to pardon us if we have not addressed them properly. If a child calls out his mother and gives her a heavy knock on the head without knowing what sacrifice to make to appease her, such child will be in serious trouble. That is how I can answer that question.

In other words, you try to manipulate things on set at times?

Can we say that your charms have kept you alive despite the fact that many of your contemporaries in the movie industry have passed on?

I don’t understand you, are you praying for me to die? I cannot explain how God has been doing it. All I know is that I am still alive till this day, hale and hearty. I know the basics in Islam, but I may look like a herbalist by virtue of my first profession in life. But in all honesty, I don’t know how God helps me scale through all of those hurdles unscathed.

Was it your profession as a hunter that necessitated your love for those roles in movies?

I was first a hunter in the thick forests in Osun State and then I became a driver. I grew passionate about acting when I started watching Chief Akin Ogungbe. So, when he came to where I was staying at Fakunle Major Hall in 1972, my love for acting had grown immensely. He was to return to where he came from in a Bedford vehicle which was also used for transporting wood (Agbegilodo), so I hid myself among the woods just to enable me follow him back. When we got to Ijebu-Ijesha, I came out of hiding and when the man saw me, he was not happy that I had to go through all that stress just to go back with him. He instructed his subordinates to take care of me because he had to take me back home. Somehow, he forgot about me but one day, he went back to my area and I went back the same way I went with him. It was after that incident that I resolved within me to become an actor, no matter what it would cost me. After sometime, my brother, the late Chief Yekini Ajileye, made a request for a driver and I simply jumped at the opportunity of driving him to Lagos from Osogbo, not because I wanted to practise the profession but because I wanted to get on set with him. That was how I started acting with his crew.

How long did it take you to become famous?

It should be about four years. It was after we had shot Opa Aje with Chief Ajileye that I came to limelight and after that, I have featured in many other movies that have further made me popular. Afterwards, I parted with my boss not out of hatred, but because people said many negative things about me since we were not staying together. He was in Osogbo while I was in Lagos and people started condemning him for not making use of his star actor who was in Lagos and many other things that happened which cannot be expressed on the pages of the newspaper.

Did you ever have a formal education of any kind?

Of course, I had my elementary education at L.A. School, Oniyere in Osogbo. Barely a year after I enrolled in Modern School in Ilase, I impregnated a girl called Lucy, so I had to leave school. It was really painful at the time but I had to accept it as fate. The child Lucy had for me is doing fine, presently at a technical school in Oyo.

Were you heartbroken about your inability to proceed to the Modern school?

I was highly disappointed at the time because I was really raring to go. But presently, I am satisfied with everything because I now have children in universities and polytechnics.

How many wives did you end up having?

Fortunately, I have just one wife. After the incident with Lucy, I took responsibility for the child and then got married to the only woman in my life presently. I have children, male and female.

Are any of your children taking after you in this profession?

Not directly as I may have wanted but one of them is a video editor, Abiodun Oyewole and he edits many of those home videos that you watch on television.

Do you have any regret as an actor?

Not really. Professionally, there is no regret but personally, I would say that the only regret that I have is that none of my children is acting. I would have loved at least one of them to take after me in the profession. That would have been a great accomplishment for me. But I’m still okay with the one who is an editor. Every day, when I wake up, I look at Oga Bello and pray that my family is like his because all his children are well-to-do. Some of them have also taken after him. I ask God and pray that God should give me the blessings he gave him, even if it is half.

How many more years do you wish to spend in the movie industry?

God is the decider of everything and I cannot really say when I will stop. All I want is for God to bless my children like Adebayo Salami’s children so that I will sit down and eat the fruits of my labour. I also have apprentices who have been undergoing training under me so I look forward to seeing them at the top.

The young actors playing your role in movies these days are not as prolific as you were in your hey days, is there anything you think they are not doing right?

Not learning appropriately from the masters could be a reason. Then, things have changed drastically since we started. Now, there is a female musician, who specialises in lewd lyrics, we have children who misbehave in the society now. Though, we warn them as much as we can, the ones who will not listen will not do so. Even some of the ladies use their bodies to get what they dance around with. They all want to buy aeroplanes now and I make bold to say that nobody can buy aeroplane with our earnings here, unless they add other secret things to the profession.

How many movies have you produced since you started?

I had about 11 before censorship of movies began and afterwards, I have had several others to my credit. Very soon, the movie I was on location to shoot before I had the accident, Ibinu Abija, will be released by Toymax but the date is yet to be decided.

There was an actor who dubbed himself as the heir of Abija, (Arole Abija), was he your apprentice?

He was an actor in Opa Aje, who played the role of Atunbi who had to costume himself just like me and afterwards, many people have come out to say that they are heirs of Abija. It is a thing of joy, though, because it is only when you have done something spectacular that people will start associating themselves with you.

Is it true that you often face opposition by some metaphysical powers on set? How did you manage to scale through on each occasion?

All I can say is that it is God who helps us to overcome every difficulty we face in life, including the ones that are metaphysical powers, because God controls everything. Even you journalists have your own challenges and I am sure it is only God who sees you through.

Which Nigerian actor intrigues you the most?

There is one young man in Ibadan, Muyiwa Ademola, who is doing very well in the industry presently. He does everything he does intelligently and interprets his role excellently.

What’s your advice to popular actors in the industry?

I want them to remember that nothing lasts forever; they should do what they have to do discreetly and try to be disciplined as well. [PM]