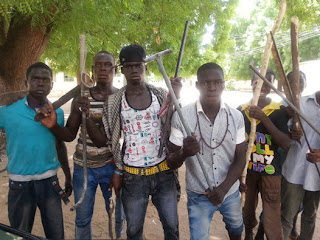 A member of the group, who gave his name as Ibrahim Yakub, disclosed this on Tuesday in Maiduguri in an interview with the News Agency of Nigeria (NAN).

He said the suspects were arrested on Monday after a three-day intensive ‘search and hunt’ for the fleeing Boko Haram members in Konduga town and neighboring villages.

Another member the group, Abubakar Adam, said the 19 terror suspects were pursued to Konduga and communities bordering the Sambisa Games Reserve Forest.

“The fleeing Boko Haram sect members have been hiding in the forest.

“But with the destruction of their training camps and hideouts by the Special Operation Forces of the Nigerian Army in June, they fled to towns and villages bordering the forest,” he said.

The Commissioner of Police in Borno, Alhaji Lawal Tanko, who confirmed the arrest of the suspects by the vigilance group, said some rifles and ammunitions were recovered from them.