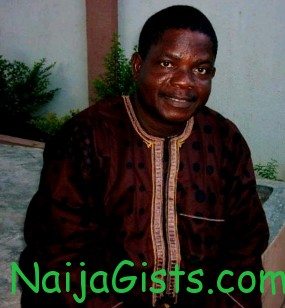 Yoruba actor Gabriel Kola Oyewo, a veteran of Yoruba movie industry who recently turns a professor at Redeemers University in Ogun State, Nigeria spoke at length on his life history in this recent interview with Doyin Adeoye.

Kola Oyewo who said his son, Adeyemi was his classmate detailed his career, life history among other issues.

At what point did you develop the passion for theatre?
Our teachers used to teach us plays while in primary school, to entertain our parents at the end of the year session, so I always took part in that. And we also did that in the secondary modern school. During the holidays, a teacher then, Uncle Kunle Olaniyan, organised Oba Dramatic Society, which I was a member, so he would teach us during the eight- week-long vacations and we would perform in Oba and other neighbouring small towns and villages.

But that would be the end of it when we got back to school. But that was how I developed my interest in theatre.

What was the first major role you played as an actor?

When I joined the Oyin Adejobi theatre group in January 1964, the first role I played was Adejare in Orogun Adedigba, which was Oyin Adejobi’s autobiography.

So, I played the role of Adejare and people started calling me that until I played another very important role, which was Kuye, that was when Oyin Adejobi adapted D.F Odunjo’s novel, Kuye, for the stage and later for television and the Yoruba photoplay series, Atoka.

What was the most challenging role you’ve played?

That was Kuye because the character was a deaf and dumb orphan. From the beginning of the play towards the end of it, Kuye remained deaf and dumb which was really challenging because despite the fact that you could hear what others were saying, you couldn’t react to it.

So, it took a lot of concentration to be able to do that. Also, when I joined the University of Ife theatre in 1973, after spending nine years with Oyin Adejobi, the first major role I played was Odewale in Ola Rotimi’s ‘The gods are not to blame’ and I’ve never taken part in a play written in English before.

With Oyin Adejobi, we improvise and it is always in Yoruba, once you know the story, you have to come up with the dialogue yourself.

I had to memorise the lines for ‘The gods are not to blame’, I was not used to a scripted play, but I took up the challenge and Ola Rotimi was there for me. He was a good man and he really helped me a lot.

Which role is most dear to your heart?

It is Odewale in ‘The gods are not to blame’, because it is a role that I played for the longest time in my life. I started playing the role in 1974 until 2000, when Ola Rotimi died.

What are your memorable moments as a thespian?

I got excited when Wole Soyinka told us that he was taking us to perform in New York in 1980. So, we went to America with a play which Soyinka directed, we were at the Black Arts Festival and we performed at Lincoln Center where we were for almost three weeks. Doctor Yemi Ogunbiyi who studied in New York, took us to so many places and it was really exciting.

There was no plan by anyone to abscond, because at that time, naira was even stronger than the dollar, a dollar was 68 kobo. We had the opportunity of going again in 1982, also to take part in the Black Arts Festival, we went for a dance drama, just about five of us, Gboyega Ajayi, Tunji Ojeyemi, Adisa Taiwo, myself and Mrs Folabo Ajayi, now a professor, Wole Soyinka’s younger sister.

As a member of the University of Ife theatre, I did not have a degree, because I went in with Secondary Modern School. It was later that I was encouraged to take a degree. I started with a certificate in dramatic arts, a certificate in Yoruba oral literature and a BA, Dramatic Arts, all in OAU.

So after my first degree, my HOD, Dr Akomolafe, advised me to pursue the directing course to the Ph.D level, so that I could be teaching those courses. So I was converted from the university theatre member to academic staff, so that was how it all started.

I had my first degree at the age of 49 with my second son in the same class in 1995. So, I converted to the academic staff in 1996, then I went for my Masters and my Ph.D, at the University of Ibadan.

I retired as a senior lecturer in September 2011, at the Dramatic Art Department of Obafemi Awolowo University. I spent my sabbatical here at the Redeemers’ University, that’s why I’m here now.

The chieftaincy title, the lecturing and the acting career, how do you manage the three?

For the lecturing, I’m here Mondays through Fridays as a lecturer and HOD, while I spend my weekends at Oba-Ile or at film locations, so that is why the number of movies I feature in has been minimal.

You played Odewale for over two decades, how did you manage to keep up with the character?

I developed into the character, although it wasn’t easy, because at the initial stage I was vibrant, because the character is someone who jumps about and very agile. But I was agile as at 2000 when last I played the role.

Even now, at 66, I’m still very agile. Because of the exercise we go through the theatre, we tend to look younger and active.

How was the experience of your son being in the same class with you?

Adeyemi was my classmate and it was fun, we’d go to class together and make noise together if we had to. I didn’t place myself above my classmates and I didn’t separate myself from the rest of the class. We did everything together, assignments, practicals, tutorials and everything. I took it as fun and before we knew it, the three years was done.

Looking at the formal aspect of theatre, are the students also taught to see a hero of Hubert Ogunde as the Yoruba movie industry does, or is it just restricted to the Greek gods?

There is nobody who is involved in theatre, either as a professional or as a lecturer or whatever, that will not pay homage to Hubert Ogunde’s pioneering effort. The academic also acknowledge and appreciate his pioneering effort.

Do you think the travelling theatre can still be revived?

I don’t think so, because people are now used to home videos, they don’t want to go to the theater to watch plays and it is even more expensive to maintain a travelling theatre, compared to shooting a movie.

And even artistes nowadays don’t want to go through all that, so I don’t think travelling theatre can be revived.

What is your take about the number of movies that are churned out to the market at regular intervals?

It is because everybody wants to be a producer and that is also responsible for the standard of the film produced. That is why the market is flooded with substandard productions.

How fulfilled are you on the job?
I thank God, because if you are doing something and you are making progress, you will know. I’m doing something that is giving me the fullest joy and mental satisfaction. I love and enjoy what I’m doing.

How do you relax?
I find time to relax. It is something I have been doing since my youth so I know how to spend my time judiciously.

Would you say the Yoruba movie industry is at its best?
I wouldn’t say it is at its best, but there are some of the productions that are better than what it used to be in the past, because they now have enough money to hire sophisticated equipment, which produces clearer pictures.

Do you think the Yoruba movie industry can ever produce the likes of Oyin Adejobi, Ogunde, ‘I sho pepper’ and the likes?

I don’t think it can produce the likes of Duro Ladipo, Oyin Adejobi and the rest of them, because people nowadays don’t want to be trained, they just jump up one day and say I want to join, they think they can join today and become Oga Bello, Aluwe, Kola Oyewo, Dele Odule all of a sudden.

They are too much in a hurry. They will abandon their jobs and tell you that they want to become artistes. They will call you and say I want to join and most of the time, I tell them that can you call a lawyer and tell him you want to join his profession, without going through the university and the law school? And the same thing goes for the medical profession, you don’t just join these professions.(Credit: Tribune)