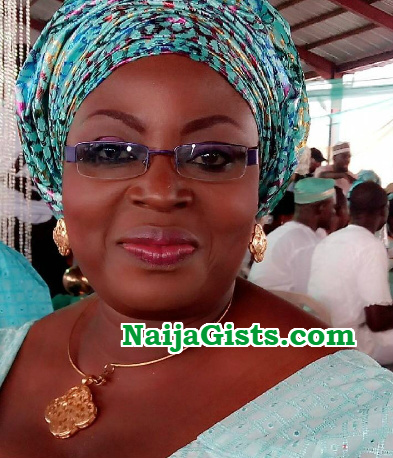 March 12, 2017 – Nigerian Actress Jumoke Olatunde George: How My Father Used Gun To Chased Me Out Of His House

Yoruba Actress Jumoke Olatunde George: The Day My Husband Beat Me Up On Movie Set In Mokola Ibadan

When was your first time on a movie set?

That’s a million dollar question, because if I have to be sincere with you, I can’t remember. I actually started my acting career while I was in school. Then, I was about eight years and some months old. I started with stage performance at NTA Ibadan.

I had a very strict father who was in the military and my mum too. In fact, they had to convince him to allow me then as a child because the girl they had cast for the role fell ill. He allowed me and I think I was also attracted to the screen because I watched Madam Anike Agbaje Williams as a newscaster on NTA Ibadan. As a young child, I admired Madam Anike Agbaje Williams a lot. I loved everything about her and I wanted to be like her. She’s old now and I hope to meet her, because she should be close to 90 now.

What was it like growing up with military parents?

I lived with my dad and step-mum who was also a military nurse. When my parents divorced, the court granted my mum the custody of her children and I was the youngest. I think I was about three years old when the divorce happened. One day, my dad came visiting and as he was leaving, he told us he has been transferred to Kano and his wife was moved also to Kaduna.

However, because I loved my father, I insisted I would go with him and so, that was how I left with my dad and step-mum. It was not easy. It was like living through hell. Let me confess, anytime my step mum and dad traveled, we used to pray to God that an accident should happen. It was that bad. We were given strict military upbringing. I don’t know if these people really loved me, because I didn’t see any love from them.

I am a striking spilt image of my father but if I have to be sincere with you, I love him. He is my first love and despite his demise, I still love him. As a matter of fact, I love my dad more than my mum. My mum is still alive but even in death, I still love my dad despite everything I went through.

So, what was your dad’s reaction when you wanted to go into full time acting?

I was done with my dad when I went into full time acting because; I was evicted from his house. I am a product of a broken marriage. My father was a polygamist, so in the course of taking sides with my dad, I got into trouble. I was still a baby when my parents divorced but I was raised by my father and my step-mum. So, all his wives were always at loggerheads, we had no peace, no unity. I was fed up with a lot of things going on in the house, as my father’s second wife was fetish.

So, I rebelled and stopped going on errands for her and so she came up with her plans. She told my father lies about me; that she sent me on an errand and I refused to go. She said I was cursing her. My father was angry, but I knelt down before him and cried. I pleaded with him to hear me out but he got angrier. My step-mum said if he allowed me stay in the house she would pack her things and leave. He said we could no longer live under the same roof and so he sent me packing. I actually felt he was joking, until he came out with his gun. He was licensed to kill, so I took to my heels and my dad pursued me, he ran after me.

Honestly it was a traumatic experience and I was still in secondary school. So, I had to run to my mum, but before getting to my mum’s house, my immediate elder sister had been there to explain everything to her.
Then my paternal grandma was still alive and she said the situation was too much to handle. She told me to go to my father’s relatives she believed he would listen to and it was so tiring. Then about two days after when I went to school, my classmate, Bola, asked me what the problem was, because I sat in class weeping and she said okay I could go home with her. I went home with her that day and that was how I started to squat with her and her elder sister because I promised God that whatever happens, I must complete my education.

So how did you do it?

I met someone who introduced me to production then whose pseudonym was Water. I can’t remember his real names, because it’s over 40 years now. Later, I met Mr. Laolu Ogunniyi at his rehearsal ground. I joined his drama troupe, did about two or three jobs together. Then during rehearsals, I met Comrade Victor Asaolu who was my mentor. 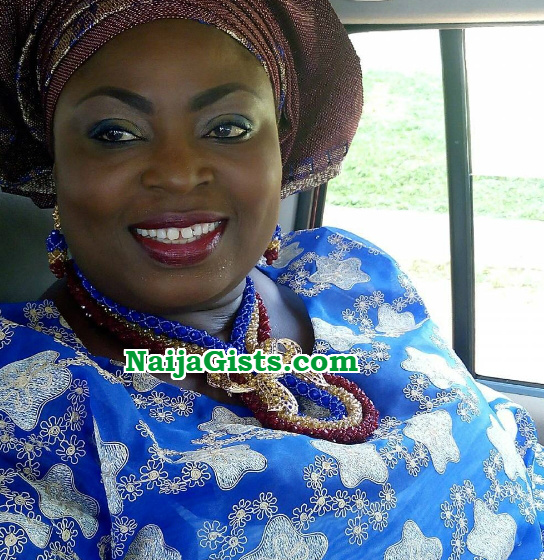 I remember he drove past me and he offered me a ride. On our way, he said “I have been watching you for quite a while now and I love your acting skills, you are going to be a very good actress if you see someone that will groom you.” Then, he suggested Yoruba drama to me because I was only doing English. So, it was through him that I started acting Yoruba movies.

Are your children acting too?

Both of them are interested in acting but it is a pity they are into different fields. My first child is a nurse. I lost my second child to domestic accident. My last baby IfeOluwa is a banker and time doesn’t permit her despite her love for acting.

I did a story recently on parents who lost their children, so what was it like?
It was painful, very painful because had it been I wasn’t on stage, I could have taken care of my child.

What kind of accident?

I was told that she hit her chest on an iron bar when they were with my mother-in-law.

So, you still blame yourself for her demise?

I would not say that because losing my second child wasn’t my fault; she was with her paternal grandma when she had the domestic accident. I was playing the role of Oya in a Sango play then.

Let’s go back to your dad, were you reconciled before he died?

Let us talk a little about the father of your children, how did you meet him?

There was a guy always by the corner that had been troubling me for quite a while, so I agreed to his proposals and before I knew it, one thing led to the other. I was admitted into Government Technical College, Osogbo to study Business Administration and in my second year, I got pregnant with my first child who happens to be a nurse now.

While she was still young, I gave birth to the second child whom I lost. Immediately I got pregnant, I started having issues with him. He didn’t want me to act and I said no way. Nobody can stop me from acting. That was the genesis and the revelation of our problem. It got to a stage we did not get along anymore.

You were not properly married?

No. Who would give my hand out in marriage? Parents that disowned me because I was trying to fight for my father’s life? Actually, my fight was justified then because his death wasn’t natural. The father of my children then was fond of coming down to my rehearsal ground. In those days, we had our rehearsal at the Cultural Center, Mokola in Ibadan. So, he came there almost daily to beat me and it got to a stage that my colleagues had to fight for me. But when I could not stand it anymore, I left, but I did not go with my kids, the children were with his mother.

Why didn’t you go with your children?

There is no way I could have gone with my children, because he did not allow me to, and people advised me against it afterwards. That was why I left without my children.

Right from childhood, I didn’t know what a mother’s love was like because I didn’t have the privilege of living with her. But I still love and appreciate her. The relationship of mother and child remains. My elder sisters are my confidants, especially the eldest.

We are extremely close and she advises me whenever it’s needed. I wasn’t so close to my immediate elder sister, because of distance. But all thanks to technology, distance is no longer a barrier. However, I love my children and they mean everything to me, and all the love I was deprived of I shower on them.