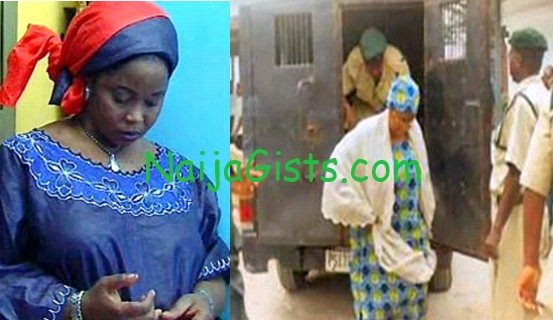 Popular Yoruba actress Wunmi real name Taiwo Akinwande Hassanat who was arrested by NDLEA officials in Lagos for Cocaine trafficking few years back recently spoke with National Mirror on how she picked her life back together after the mess. naijagists.com

You disappointed your fans some years back when you were arrested for drug trafficking at the airport by the National Drug Law Enforcing Agency (NDLEA). How did it feel?

It was one sad experience that I would never wish for my worst enemy. I did not only disappoint my fans, I disappointed my friends, families and, of course, my very self. I have been acting since 1981 when I joined Feyikogbon, a Yoruba serials, on the television and until that incident, I was respected and loved by all.

Whenever I passed through an area, I was a known face and I enjoyed everyone’s approval. I thought my world had come to an end when that incident occurred, I thought I was going to die, I didn’t know, I would ever be accepted into anywhere again.

I hope I could turn back the hands of the clock, I just wished it never happened but I thank God and everyone for giving me the opportunity to redeem my image.

Was it your first time?

Yes, it was and I really wouldn’t want to have the memory back. It was one wrong decision I took, it was one big effort of the devil to ruin me and my career but I thank God I was able to survive it.

A lot of people didn’t live to tell their stories, I thank God for the opportunity He gave me to learn my lessons and to tell the story afterwards.

What lesson(s) did you learn?

So many lessons I learnt.

Above all others, I have learnt that God Almighty is a loving God. He is merciful, He does as He wills, He is God of a second chance and I intend not to misuse this rare opportunity to amend my ways, wash off the evil blemish the devil inflicted on me.

I have also learnt to take each day as it comes and never compare myself with others. I learnt to be contented with what I have and not to allow any lack to push me into trouble. I learnt to love God, appreciate people and rely on what I can do to earn my money. So many lessons I have learnt through that incident.

Many believe that many top Nigerians who are rich today have been involved in one drug deal or the other before. What would you say to that?

I would say it is wrong to believe every hearsay that comes our way. If we will listen to these rumours, we are likely to be taken over by them and we may end up in trouble. Besides, what one person will do and escape, another may do and end up in a cobweb of problems.

Was that what happened to you?

This belief that you mentioned is not just coming up for the first time. People had heard of even worst things before.

All I can say is that we should be wary of what we listen to because it is what we hear that will stay long on our minds; it is that which will play back on our minds and if these things are negative, they can push us into negative acts.

Take for instance, students in higher institutions, even secondary schools. If they go by the general notion that if they don’t belong to a secret cult, they may not have it smooth on campus, they will be lured into wicked acts that are associated with cultists.

The same thing goes for ladies, if they will go by the saying that there is nothing wrong in using what one has to get what one needs, they will easily go into prostitution, which will eventually lead them to all sorts of evil. If mothers want to join the bandwagon or the trend, they will not be able to lead their children aright; they will end up as failed mothers.

I have tried to help myself by the option I took and like I said, I have learnt my lessons. There is no hard situation that can make me get involved in any negative deals in my life. That is just it.

Has this, in any way, affected your acting profession?

I must tell you that it has not. I thank God for the kind of people in my industry. Everyone can attest to the fact that they all rallied round me at that time of trial and even after; they have continued to invite me for roles.

I thank God for this which is why I said it has pleased God to give me another chance to live a good life and I am not going to play with it. I appreciate it and I will always be His mouthpiece anywhere I find myself or whenever I have the opportunity.

You don’t live with your husband. Is this a further confirmation that actresses can’t keep their homes?

We want to keep our homes. There is no woman that goes into a marriage with the mindset of making it fail. The problem we usually encounter is that of full support and lack of understanding on the part of our men.

Many of them can’t endure or let me say, cope with the dictates of our job and because we love what we are doing, we find it hard to give it