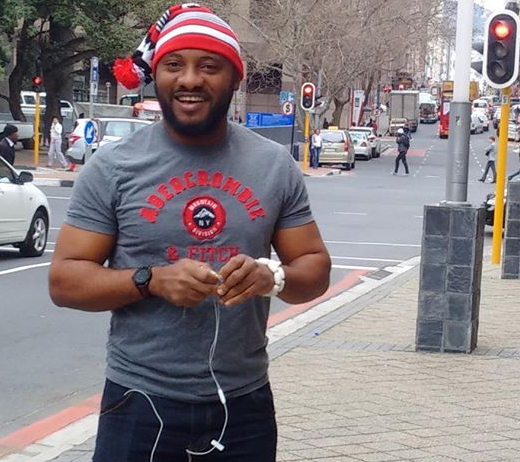 Aside the actor we see on the screen, who is Yul Edochie?

I am a very simple guy. From the assessment of myself, I think I love life. I love enjoying myself and I would say I am not really a bad person because I don’t engage in bad stuff. I love peace. I love it when everywhere is peaceful and people are happy. I try as much as possible to preach peace in everything I do. I would rather walk away from anything that is going to cause problems. I am very down to earth. A lot of people have this wrong impression about me, but I am not like that. We build this world around us for protection, but by the time you come close to me, you will see that I’m very down to earth. I try to be very friendly. No matter what I have achieved, it doesn’t get to my head. I still hang out with folks and old friends. I am just the very easy-going person who is always happy, hardly gets angry. I am Pete Edochie’s last son. My full names are Yul Chukwubuike Daniel Edochie. My father named me after an American actor. In fact, we were all named after foreign actors.

How was growing up like with him as a father?

It feels good. Growing up was really good with him as a father.

Your father appears very strict in movies, is that how he is at home?

He is extremely very strict, but I thank God that He gave me a father like him. I couldn’t have wished for a better father. He is a strict Catholic, so a lot of things I know today, I learnt because of my background. Like I told you, I would rather die than dope. Kill me but I won’t take cocaine, and that’s how my father is. My father made us to understand that it is better to have a good name. Good name will get you riches and everything you need. That’s the kind of family I was raised in, and my mum too is very strict. There wasn’t much money then to throw around, but we grew up loving each other and God.

What is the biggest thing the surname ‘Edochie’ has done for you?

Lots of it though, but I think my own name paved a way for me too. That was why at a point; I don’t tell people I am Pete Edochie’s son. I had my reasons then. I am blessed and I also get recognition being Pete Edochie’s son. And I try as much as possible not to mess up the name.

Tell us about growing up?

I was born in Lagos. I think my mother was in Law School then, and after that, I was brought down to Enugu. That was where we grew up. But we were always going to Lagos and Port Harcourt.

It has been quite good. Pharmatex Industry endorsed me. I also got on Tinsel. In fact, there were other stuffs I got into in the year, but you know, one doesn’t need to blow his trumpet. But in all, God has been awesome. It has always been my dream that someday, I’d be on Tinsel, and my dream has actually turned a reality.

Why did the drugs company pick you?

Yea, I remember I asked the Managing Director of the company, ‘why me?’ And he said that it’s because I have a good reputation and lots of people like me. I was quite impressed, but to be honest, keeping up a clean slate in the entertainment industry is not an easy task. People who don’t know you are so quick to judge and even call you a snub.

How does being a part of Tinsel make you feel?

I feel good. I have been a fan of Tinsel for seven years; I am one of their biggest fans. Being part of their cast is a great achievement for me.

What actually happened to your brother, Linc Edochie?
Yeah, Linc started before me. He started like a year before I got into Nollywood but later left to do something else. So, I would say we all have our own destinies.

Do you think you are going to leave the industry anytime soon?

No, I am not even thinking about that. Never! I studied Theatre Arts and I took my time to read this, so I didn’t just get in.

Maybe you will take it to another step like directing and producing?

Have you experienced any form of embarrassment from your female fans?

I don’t see them as embarrassment. Actually, a lot of people do a lot of things. One happened recently when a girl saw me and wanted to take pictures with me. The next thing was that, she kissed me so deeply and passionately right in front of my wife.  I am so lucky; I have a wife who understands.

You kiss so much in movies, how do you get off that feeling after the shoot?

I feel nothing. For me, it’s all about work. Some people say they kiss and other things get attached; but for me, I don’t feel anything at all. During the shoot, I just ‘die’ and wear the character I am playing, by the time we are done and I come back to myself, I feel nothing.
Funny enough, all those romance scenes, there are about five or more crew members in the bedroom with you, so how comfortable would you be to start feeling something else? (Laughs). Aside that, you still have lines in your head that you are battling to remember. So my dear, the supposed feelings would be far dead and gone.

How have you been coping exchanging saliva through deep kissing with different actresses in different movies?

At a point, I had to limit the kissing scenes I play. I know I did a lot of that while I was still young in the industry. But at a stage in my career, I rejected a lot of roles that had to do with kissing and romancing. I can do romance scenes for you, perfectly without kissing. I can act that I am madly in love with a girl, without getting so romantic with her. I often talk to the director to let me have it my own way, which is not kissing the actress in question, and they would let me. At the end of the day, the film would come out well.

Assuming that in the script, it was clearly stated that you are to kiss the actress, don’t you think she would feel offended if you skip that part?

This is exactly what happens when you are not trained. It has actually happened to me and caused lots of issues on set. I know lots of actresses look forward to kissing me on set. This particular one saw the script and was jumping that she was going to kiss Yul Edochie, but I was tired of the kissing thing and asked the director to allow me do the scene without the kissing. When the actress heard about it, she flared up. She was like ‘Yul, you have kissed so, so and so person but you don’t want to do the same thing to me’. It was quite funny and annoying too.

As an actor, you’re always on the road, how then do you cope with managing your Lagos-based family?

It is not easy. Trust me, it is not. I try my best. Whenever I am in Lagos, I make sure I stay with my family. I do two or three movies outside Lagos, and then hurry back home to meet my family.

How many days do you often stay away from home?
I try not to stay away that much. At most one month. Earlier in my career, I was doing three months just to meet up, but now I think I have gotten what I want. So, I have slowed down. Within one month, I should be home.