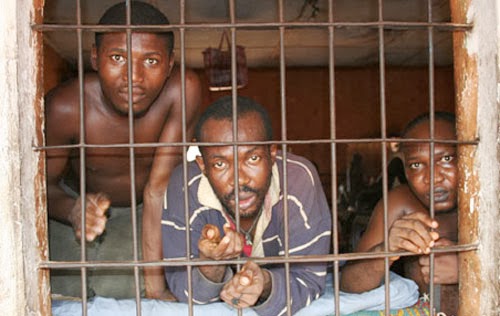 Some Nigerian citizens recently arrested for living illegally in Saudi Arabi have been held in detention at a warehouse near Makkah for the past two weeks.

On Thursday, BBC reported that 1000 Nigerians are being held in Saudi Arabian detention facility for staying illegally in the country.

These folks were held in bondage under unbearable condition against their wish pending the intervention of the Nigerian consulate or the Federal Government of Nigeria.

Mr Al Shumaisy, one of the detainees who spoke with BBC Hausa from the detention warehouse said no Nigerian consulate official had visited since their illegal arrest for the past 2 weeks.

“At least, we are Nigerians. There are about 1,000 of us here in the detention facility, including women and children. We spent at least two weeks here. Some of us could not even perform five daily prayers because they are sick and they are not receiving any medical attention. They put us under air-conditioner and everybody is shivering because of cold,” one of the detainees said.

Al Shumaisy said other nationals in detention include Nigeriens, Ethiopians, Malians and Pakistanis.

He said unlike Nigeria, other countries have since come forward to pick their citizens.

He claimed that they couldn’t reach Nigerian consulate officials. “We could not reach Nigerian officials since we were detained here. We were asked to come out, and we obeyed. But they are keeping us here, “he said.

Why the neglect? Federal Government or the consulate over there should come to their rescue on time.

This is unfair especially for the children and the women.