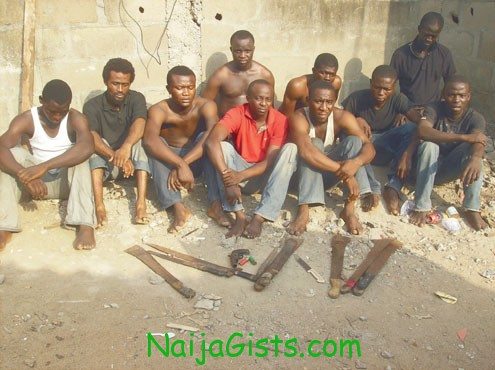 According to pm news, at least eleven members of the Buccaneer Confraternity cultist group have been arrested today for disturbing the peace in Lagos by men of the state anti-robbery squad, Lagos State Command. naijagists.com

The suspects who are from various higher institutions in the country were arrested at Ketu and Agiliti, Mile 12, Lagos after a clash with members of another cult group, Eiye confraternity.

During the fighting which disrupted commercial activities in Ketu and Mile 12, dangerous weapons like cutlasses, pistol, knives and others were freely used by the suspected cultists.

The suspects, it was learnt, vandalised properties in the area before they were subdued by policemen.

The two cult groups, investigations revealed, clashed at Ketu and later moved to Agiliti area in Mile 12 where they continued fighting.

Items recovered from them include one locally made pistol, two live catridges, knives and 11 cutlasses.

One of the suspects, Ayebusiwa Tosin, who described himself as an OND holder from the Ondo State Polytechnic (formerly Rufus Giwa Polytechnic), confirmed that those arrested were members of the Buccaneer confraternity.

“We are not armed robbers, we are members of the Buccaneer Confraternity. We were arrested during a clash with members of the Eiye Confraternity,” Tosin, who was identified as the leader of the group stated in his statement to the police. Another suspect, Seun Bilogun, dissociated himself from the group, saying that he was arrested in his house at Ijero Street, Agiliti while cooking by policemen from SARS.

Sources at the Ikeja-based crime squad disclosed that the suspects would be charged to court after conclusion of investigation.

How come members of the Eiye Fraternity group’re not arrested?