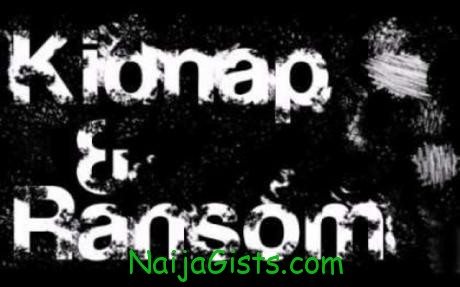 The Nigerian Army on Wednesday beefed up security at the Ojo Cantonment, Lagos, after a two-year old daughter of a Lieutenant Colonel was allegedly abducted by suspected kidnappers on Tuesday afternoon from the fort.

An investigation by the News Agency of Nigeria (NAN) reveals that immediately the kidnapping was discovered on Tuesday, all entries and exits from the sprawling cantonment were shut with stern looking armed soldiers preventing movement. naijagists.com

A resident of the Ojo Cantonment told NAN that Tuesday’s kidnapping would be the second abduction at the barracks within a month, as another two-year old daughter of a Major, who was forcefully taken away from her parents’ home in the barracks four weeks ago, had not been found.

NAN learnt that the armed abductors on Tuesday left a trail of blood, implying that one of the assailants or the victim must have been injured during the incident.

Residents of the large cantonment, NAN learnt, are now suspecting that they could be living with ritualists or have the criminals breaching barracks security at will, to perpetrate such dastardly acts.

As at 1.40 p.m. on Wednesday, the little girl had not been found, either dead or alive, NAN reports authoritatively.

Ogunsanya also added that a number of suspects had been arrested in connection with kidnappings at the Ojo Cantonment.