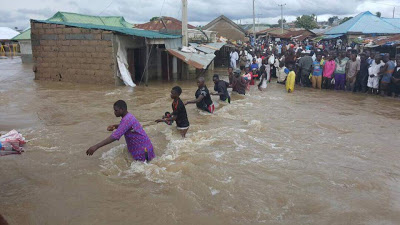 July 10, 2017 – 11 Killed By Flood In Niger State As Residents In Submerged Homes Were Swept Away By Floods

Many Nigerian cities were hit by flood  at the weekend after longs hours of rainfall.

Deaths were recorded as homes were flooded in several parts of Niger State as many lost their homes in Oyo and Lagos states.

11 people died in Suleja and other towns in Niger State. Many parts of Ibadan, the Oyo State capital, were flooded.

Residents of highbrow Victoria Island, Lekki and Ajah in Lagos were yesterday waiting for the floods to recede. They were warned to vacate the flood-prone area because of the expected intense rains.

Many parts of Lagos Island have been thrown into darkness because the floods soaked power facilities.

Niger State was worst hit by the floods after five hours of rainfall. Nine people died in Checheniya and one in Kuala, Suleja. Another person died in Ayin-Nassarrawa in Tara Local Government Area of Niger State.

Houses were submerged. Properties worth several millions of naira were destroyed in Kaltuma and Angwan Hearing in Suleja.

He said the identities of the victims were yet to be ascertained, but confirmed that 11 people had been declared dead between Saturday night and yesterday.

Ahmed said: “As I am talking to you now, the search and rescue operation is going on and so far, two bodies have been recovered. Initially, we thought eight people were lost in Suleja but we received a report from the team that the number had increased to ten. We have one in Tara.”

But the worst-hit areas include Kaduna Road through Bakin-Iku, Chanchania and Yaro College, Kantoma, Kuspa, Angwa Gwari, and Angwa Juma.

Some buildings collapsed during the downpour, resulting in the death of some of the residents. Many were injured.

Some residents, who tried to leave their submerged homes for safety, were swept away by the floods.

Cars parked on the water ways were moved from their original positions.

Continue Reading
You may also like...
Related Topics:Flood, niger, state