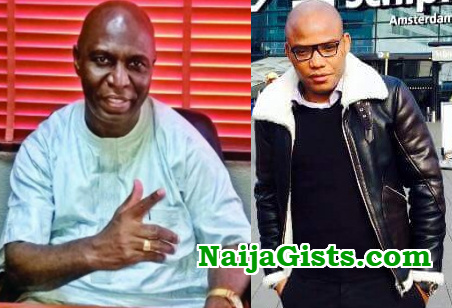 An an interview with Kadaria Ahmed, who anchors Channels Television’s The Core, Nnamdi Kanu said two curious things. He said he was for confederation and he no longer wants to fight with arms. First, is he serious? This man peddled incendiary rhetoric asking for guns. Is he not a coward? Confederation means the Southeast is still part of Nigeria.

Maybe he has recanted or he does not know political science 101. Kanu showed himself an ethnic entrepreneur, rallying gullible kinsmen to stock his Biafra purse with hard-earned money.

He also boasted that he could win a referendum in Rivers State because he rallied a big crowd in Port Harcourt.

He should not mistake the Igbos in PH with Ikwerres, Ogonis, Ijaws, Andonis, etc in Rivers.

He could rally a big crowd in Ladipo in Lagos as well. This is one delusional conman.

[By Sam Omatseye, The Nation]

Continue Reading
You may also like...
Related Topics:conman, kanu