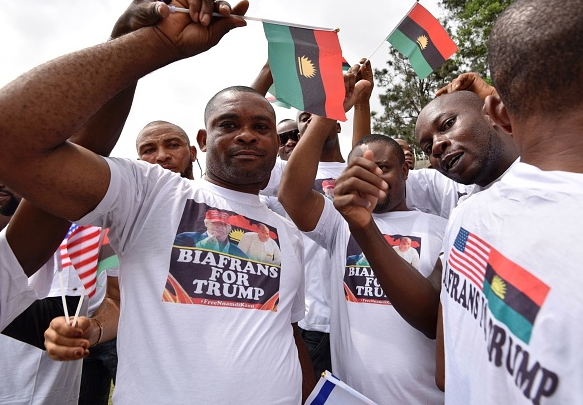 Reports indicate that a combined team of the Nigerian Police and Army allegedly shot unarmed protesters celebrating the inauguration of US president-elect Donald Trump in Port-Harcourt, the Rivers State capital.

According to reports, the media and publicity ‎secretary of IPOB, Emma Powerful, alleged that no fewer than 11 members of the pro-Biafra group have been shot dead by security operatives.

“They have attacked our people; 11 have been confirmed dead, many others have bullet wounds”, he claimed in the statement,” he said.

He alleged that the attack was carried out by the police, the Army and the Department of State Services.

A twitter user, Anioke Collins, said that Biafrians were being shot by police officers at Igwuocha area of the state.

It was reported earlier that pro-Biafra supporters took to the street in the Port Harcourt to march in solidarity with Trump who they hope would be sympathetic to their campaign for independence.

Afeez Oyetoro Saka: I Have Never Cheated On My Wife, How God Delivered Me From Seductive Ladies
Governor Okorocha Calls For Mass Defection To The APC, Says Ndigbo Future Lies In The Party