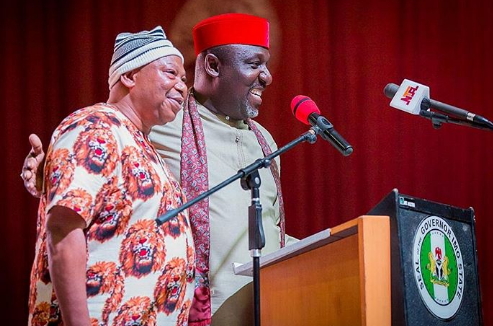 January 21, 2017 – Okorocha Urges All Igbos Living Outside The South East To Join The APC Party

Gov Rochas Okorocha of Imo has reiterated that the political future of the Igbo race can only be guaranteed in the ruling All Progressives Congress (APC).

Okorocha, the Chairman of APC Governors Forum, said that South-East could not afford to be in opposition party, and urged all Igbos living outside the zone to join the APC.

The governor in a statement by his Chief Press Secretary, Mr Sam Onwuemeodo, restated this in Owerri on Saturday.

“All indigenes of the South-East geopolitical zone should seize the opportunity offered to them by the ongoing registration of APC across the nation and register in mass in the party.”

He said the Igbos had no better option at the moment than to join the APC, adding that any form of opposition to the centre would result to a great political setback.

“APC is at the centre and in most states of the federation and what the south easterners should do is to wake up and identify with the government that has come to stay,” he said.

Okorocha, who solicited peaceful registration in the zone, warned party leaders to avoid rancour and utterances that could bring the party into disrepute.

“Very soon we will be confronted with Anambra governorship election and we must maintain the peace and unity this party has enjoyed since inception in other to make wave in the election,” he said.

The governor said this was not the time for leaders of the party to flex undue political muscles.

According to him, what should be important to any patriotic party member is how to win election in the four remaining states in the South-East.

Okorocha, however, wished a successful membership registration and called for absolute calm during the exercise.