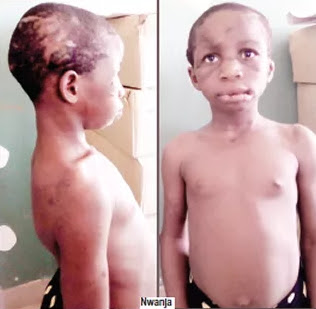 Meet Faith Nwanja, an innocent girl who is lucky to be alive after years of torture by her madam.

The 12-year-old girl told officials of the Ebonyi State Ministry of Women Affairs and Social Development how she was subjected to inhuman treatment by her mistress, Mrs. Mrs. Nkechi Bartholomew.

The girl, who hails from Okoffia community in Ezza South Local Government Area, was tortured, mutilated and abandoned by Bartholomew for being too stubborn.

Bartholomew, a childless woman and seamstress adopted Nwanja and took her to Onitsha, Anambra State, when she was eight years old.

But Bartholomew allegedly disfigured the girl.

Nwanja has shocking scars and injuries all over her body, including eyes. She also has bloodied mouth and has lost one of her hands to torture.

Narrating her ordeal, the girl said her madam always tortures her with sticks, hot iron and other dangerous weapons for being stubborn.

She also alleged that Bartholomew, who hails from the same area with her, always inserts stick into her private part.

It was learnt that Bartholomew tortured Nwanja and locked her up in a dark room. She was rescued by Bartholomew’s sister and taken back to Ebonyi State.

Nwanja equally accused Bartholomew of chaining her and that she only eats once in a day which, according to her, is usually in the evening.

“My madam, Bartholomew, disfigured me like this. I was a full-fledged human being when she took me to Onitsha, Anambra State. She inserted her fingers in my eyes and inflicted these injuries on me.
“In this my mouth, she usually uses stones and puts inside it. She said I don’t normally brush my teeth and since I cannot do it, I must always suffer for it.

“The husband has never beaten me; he always gets annoyed seeing me being tortured by his wife. At times, he will summon courage and quarrel with his wife because the wife is bigger than the man.
“My madam used to lock me inside a dark room after beating me up. I was taken home by my madam’s sister who told her to take me home but she refused. My madam used to tell me that nothing will happen if I die, that she will spend her money and regain freedom if she is arrested if anything happens to me.

“I was attending school in the village before she took me to Onitsha. But since four years that I went to Onitsha, I have not gone to school. I only eat in the evening every day.
“My madam used to insert stick into my private part, she says I am stubborn. After beating me up, she will bring to gallons and placed my two legs. She will tie my legs on them and insert stick into my private part.”

Igwe said it was contrary to the constitution of the Nigeria 1999 as amended in 2011.

The suspect is still on the run while the woman who rescued the victim has been arrested by the police.