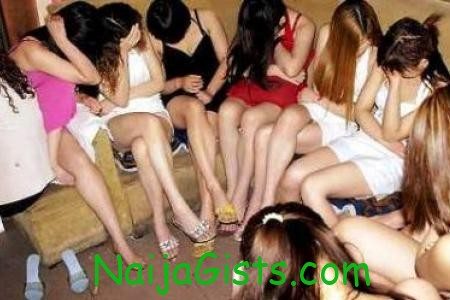 At least 13 young teenage Chinese prostitutes were arrested on Friday by the Nigerian Immigration Officials during a raid on their prostitution base on Emina Crescent, off Toyin Street in Ikeja, Lagos State Nigeria. naijagists.com

These young girls were brought to Nigeria to serve Nigerian Politicians, expatriates and business executives by a couple identified as Sun and Yin Li.

The owners of the prostitution ring have escaped arrest and only the 13 girls were successfully picked up from the apartment where they operate on Friday.

The arrest of the above teenage Chinese prostitutes was confirmed by Nigerian Immigration Service spokesperson, Joachim Olumba.

Olumba said the girls are currently in their custody. He said they’re on the trail for their employer.

He further stated that after proper investigations, they’ll either deport the girls back to China or hand them over to Chinese Embassy officials in Nigeria for the appropriate action.

This prostitution thing in Nigeria is really going out of hand.

We pity the wives of those naughty politicians and business executives.