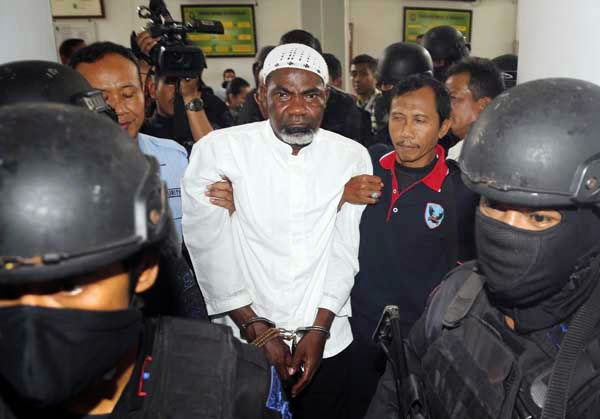 Nigeria stands to lose no fewer than 132 citizens who are on death row in various prisons across Indonesia, China and Singapore.

While the Taiwan Embassy in Abuja denied knowledge of any Nigerian on death role in its country, the story is totally different in Indonesia who, last week, put four Nigerians to death by firing squad.

Sunday Sun investigation at the Indonesian Embassy, Abuja, revealed that 11 Nigerians are currently on death row, having been sentenced to death at various times by Indonesian courts.

They were sentenced to death on drug-related offences, which largely centered on being in possession of heroin and other narcotics. 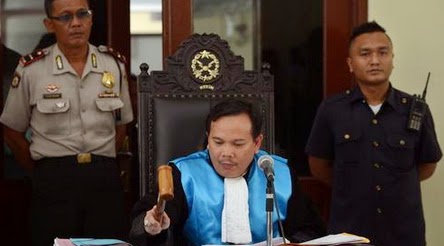 The judge who rejects clemency in Indonesia recently

Some human rights groups had sometime in April 2013, petitioned the National Assembly over the fate of 14 Nigerians awaiting death in Indonesia.

The groups, World Alliance for Against Terrorism, Violence and Inhuman Treatment and Committee for the Defence of Human Rights (CDHR), also urged the federal government to wade into the matter.

But in spite of pleas for clemency by the Nigerian government, Indonesia known for its hard stance on drug offences, has never shied away from carrying out capital punishment on drug-related offences in its country.

For instance, prior to the execution of Messrs Martin Anderson, Okwudili Oyatanze, Jaminu Abashin and Sylvester Obiekwe by the Government of Indonesia for drug-related offences last week on the island of Nusakambangan, the Indonesian government had executed two Nigerians, Daniel Enemuo and Solomon Chibuike Oka-for on January 18 this year.

A helpless Nigerian Ambassador to Indonesia, Muhammad Suleiman, had in his recent correspondence to the Minister of Foreign Affairs, Ambassador Aminu Wali, following the execution of the four Nigerians, bemoaned the resurgence of drug crime in Indonesia.

He had in his report, told Wali that while pleas by President Goodluck Jonathan and Wali were being pursued, seven fresh cases had emerged, which made it impossible for something concrete to be done in the case of Nigerians involved in drug related-offences in Indonesia.

However, the case of China seems to be more alarming considering that execution of drug offenders by the Chinese government is done in a well-packaged manner which most times, does not draw the attention of the general public.

For instance, a check at the Nigerian Ministry of Foreign Affairs, Abuja, revealed that on December 19, 2014, one Obiora Ifekpolugwo was executed in China and this did not draw both local and international attention.

Similarly, Sunday Sun source at the Nigerian Ministry of Foreign Affairs revealed that two Nigerians were also executed in China on April 24.

But in spite of this development, a total number of 120 Nigerians are still on death row in China for drug sales/drug smuggling offences.

When contacted on the number of Nigerians on death row in China, the Chinese Deputy Ambassador, Mr Zhang Bin, said the embassy does not have such figures, directing Sunday Sun to the Consular Department of the Nigerian Ministry of Foreign Affairs.

Checks at the Ministry of Foreign Affairs revealed that in Beijing Yancheng, three Nigerians are on death row (2012 statistics), while a correspondence by the Consulate-General of Nigeria in Guangzhou, China, dated January 7, 2015, showed that 74 Nigerians are currently on death row in Guangdong and Guangxi provinces.

In Singapore, only one Nigerian is reported to be on death row, according to the Nigerian Ambassador to Singapore, Nonye Rajis-Okpara.

Speaking from Singapore, Rajis-Okpara said the Nigerian Embassy in Singapore applied about a year ago to the Singaporean president that the death sentence be commuted to life imprisonment and that the government was still looking into it.

“Because of this, I am not at liberty to release the name,” Rajis-Okpara told the Sunday Sun correspondent, even as she said five Nigerians were still in Singapore prisons for drug -offences.

At the Taiwan Embassy in Abuja, an official of the embassy who pleaded anonymity told Sunday Sun that he was not sure if any Nigerian was on death row in country

He, however, added, “many years ago, there was one Nigerian who was caught doing drugs from Taiwan to China and sentenced to life imprisonment. But it was cut short due to his good behaviour in prison. That means that there is no one at the moment.”

Several efforts to get the numbers of Nigerians on death row in Malaysia were unsuccessful as an official of the embassy told Sunday Sun that the ambassador who is responsible for providing such information was unavailable.