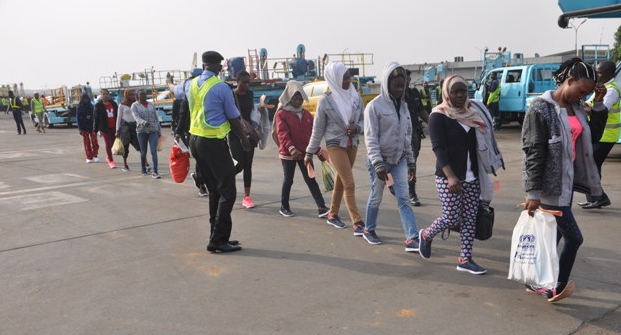 NEMA today received 149 Nigerian returnees who had been stranded in Libya, bringing the total number brought back to the country in the last five weeks to 975.

NAN reports that the Boeing 737-800 aircraft with Registration Number 5A-DMG which flew in the returnees touched down at the Murtala Muhammed International Airport, Lagos at 6:35pm.

Comprising 29 females, 115 males and five children, the returnees were assisted by the International Organisation for Migration (IOM) .

Receiving the returnees, the Director General of NEMA, Alhaji Mustapha Maihajja, lauded the efforts of the Edo State Government at curtailing the effect of illegal migration of youths.

Maihajja, who was represented by the Southwest Zonal Coordinator of NEMA, Alhaji Suleiman Yakubu, said the state had put various schemes in place to rehabilitate and reintegrate the returnees into the society.

He advised the returnees to take advantage of these programmes to acquire vocational skills or further their education in order to contribute their quota to national development.

The DG particularly commended the advocacy, sensitisation and enlightenment programmes that discourage parents, guardians and youths from embarking on deadly journeys.

He said that a special task force had been set up with the mandate to address the incidence of such deadly journeys.

NAN reports that the returnees were also received by officials of Edo State Government, the Nigerian Immigration Service (NIS) , the National Agency for the Prohibition of Trafficking in Persons (NAPTIP), the Federal Airports Authority of Nigeria (FAAN) and the Police.

Continue Reading
You may also like...
Related Topics:libya, Nigerians