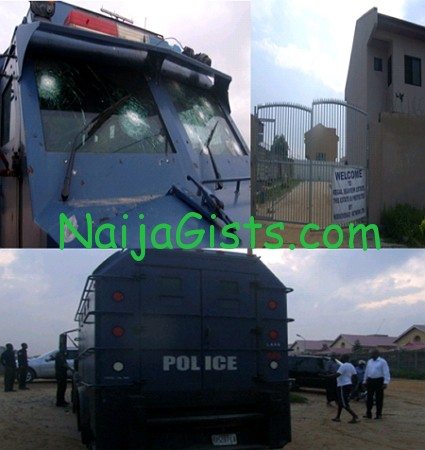 About 15 gunmen in the early hours of today attacked a residential estate in Lekki, next to Goshen Estate and Elf Estate, in a scene described by one resident as coming straight out of a movie script.

The police intervened soon after the robbery attempt began, and nobody was hurt.

The residents in the estate and surrounding neighborhoods awoke to the horrifying experience, which played out between the Second and Third Lekki Roundabouts, the gunmen arriving in two vehicles and storming their way into the estate.

A witness said the men gained access by driving in behind a resident and threatening the security guards.  As part of the drama, their getaway vehicle was said to have been stolen at gunpoint in Isolo, and arrived with the car owner still bundled inside the boot.

The men set about entering homes, and had robbed about six residents before the police arrived at about 1.00am, blocking the main entrance of the estate with an armoured truck.

The robbers, determined to escape, forced the whole neighborhood—men, women and children— flat on their stomachs.  One resident, still reeling from the shock, said the ordeal felt like five hours, although it only lasted about an hour.

“It’s happening much too often,” another commented.  “It is a miracle no one got killed.”

The robbery seemed well calculated and planned.  From what the car owner who spent terrifying hours in the boot of his car described, the men convened at what seemed to be a mechanic’s workshop to put finishing touches to their plans before they proceeded to Seaview.
What the robbers did not anticipate was the police presence and exchange. Then again, they may have anticipated a challenge as they came prepared with sophisticated and deadly assault gear, which forced the police to back off eventually. Some resident speculated they were armed with Uzis and AK 47s.

The Police/Rapid Response service armoured truck was relentlessly hit by the robbers during the intense exchange of fire, leaving it riddled with bullet holes, punctured tires, broken windscreens etc.