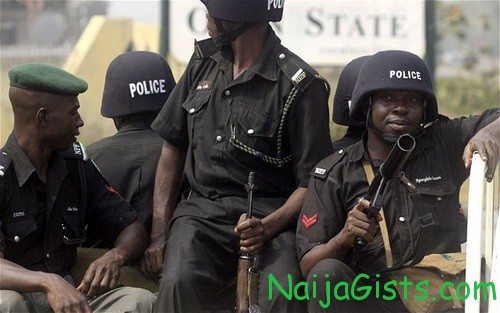 The incident occurred around Osolo Way near a popular eatery at Ajao Estate, Lagos.

The police officer, simply identified as Inspector Ogedengbe, was shot when he led a team of policemen attached to Ajao Estate Division to rescue some security guards of a hotel around the area where the gang went to operate.

The gang, on sighting the patrol team, shot the police inspector, who died on spot and a coporal, who was severely injured.

According to eyewitnesses, the robbers took away  the police men’s AK 47 rifles and other valuables, while they shot sporadically to scare away residents as they fled the scene of the incident.

The police officers were later rushed to a nearby hospital.

While the police Inspector was certified dead and his body deposited at Ikeja mortuary for autopsy, the coporal whose name was not yet ascertained, was critically injured and was still receiving treatment at the hospital as the time of filing this report.

When contacted, the Public Relations Officer of the Lagos State Police Command, the Deputy Superintendent of Police, DSP Ngozi Braide, confirmed the incident.

She said that the robbers had a gun battle with the police and in the process killed the police inspector and injured a corporal.

Braide disclosed that the police recovered one AK47 rifle from the robbers and one of them escaped with a bullet wound during the gun battle.(Credit: PM)