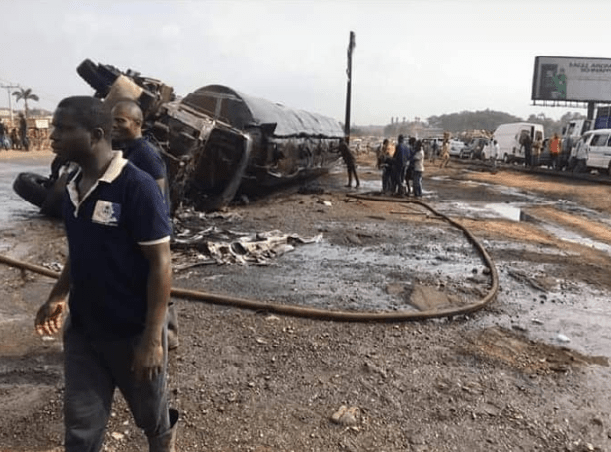 Not less than 2 people were today burnt beyond recognition when a tanker conveying Premium Motor Spirit (PMS) spilt its content on Sawmill bridge Onipepeye area of Ibadan, the Oyo State capital city.

Six vehicles, more than 10 motorcycles and many houses were destroyed on the Sawmill axis of the Lagos-Ibadan expressway, Ibadan when the incident occurred around 2pm.

But for the timely intervention of the men of the State fire service, there would have been an explosion as the scene was close to a gas station around the Onipepeye area.

Motorists and commuters scampered for safety when the driver coming from Lagos axis end of the expressway lost control just after the Sawmill bridge.

In a bid to stabilise the vehicle, he was said to have tried to manoeuvre the vehicle but couldn’t prevent the content from spilling on the highway.

It was learnt a male and female were caught in the blow of fire as they attempted to escape, getting burnt beyond recognition.

The identity and whereabouts of the driver of the tanker remained unknown at the time of filing the report.

An eye witness, who identified himself simply as Mr. Abbey, said:

“It was the spillover of fuel from the fallen fuel tanker at the main road that catches fire from one pit under Onipepeye bridge, and before we could say anything, we heard a big exploding sound.

“It was so terrific, then there were thick flames everywhere and I think in the process where everyone was trying to get out of the scene that the two persons were so unlucky as the fire caught up with them. 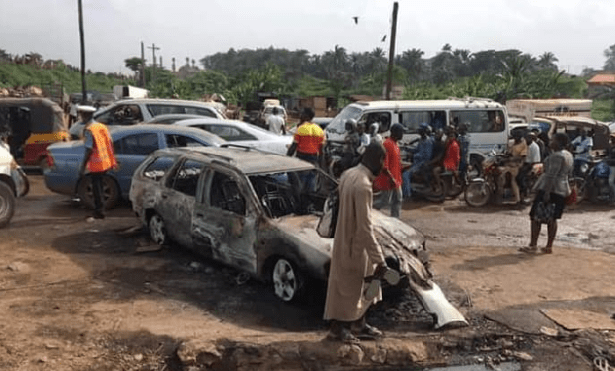 “We called the fire service personnel to come and rescue the situation before the fire started but it took them more than 40 minutes before they arrived.

“By the time they got here, the fire had already burned two people till death.

“These people (the victims) were inside the car, trying to navigate their way to the main expressway.

READ ALSO: Accident claims two lives on Lagos/Ibadan Expressway
“They should be coming from either Gbagi market or Gate axis we did not recognise any of them as you can see they are burnt beyond recognition with all their personal belongings also burned with them.”