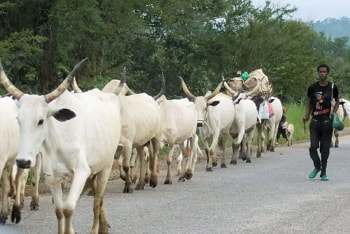 Passengers in an 18-seater Toyota Hiace bus escaped death by a whisker on Tuesday when some cows that invaded Owo-Benin Road in Ondo state hit their bus.

An eyewitness revealed that tragedy was avoided as the driver skillfully swerved the bus marked KPA 77LG to a safe portion of the narrow road.

A similar incident which happened on Sunday injured several passengers.

The witness added that shortly after the cows hit the commercial bus on Tuesday, the herdsmen guarding them reportedly spoke to the remaining cows and fled into the bush, leaving the injured cows on the road.