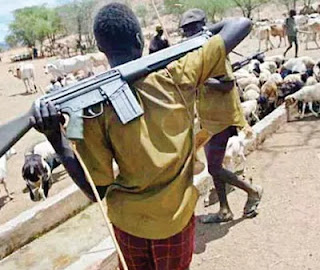 Cattleboys Hassan Abidu and Yakubu Salem, have been sentenced to 20 years with hard labour by a Delta State High Court siting in Asaba for unlawful possession of firearms.

The convicts suspected to be members of a group of armed nomads terrorizing indigenes of Ibusa and its environs especially farmers, were pronounced guilty on a two count charge of unlawful possession of firearms proffered against them by the Attorney-Generalof Delta State.

The offences are punishable under Section 3(1) of the Robbery and Firearms(Special Provision) Act Cap R.II, Laws of the Federation of Nigeria, 2010.
‎They were sentenced to 10 years imprisonment each with hard labour and without an option of fine.

According to prosecution, on or about the 23rd day of February, 2015 at about 0600 hours, the Ibusa Police Division received a distress call that a group of suspected Fulani boys numbering about six were sited around Power Line, Ibusa armed with dangerous weapons including firearms.

A team of Anti-Robbery Squad which responded to the distress call later arrested Hassan Abidu and Yakubu Salem in possession of two single barrel guns without license which they claimed they used for hunting.

They also claimed that they did not know that it was an offense to carry arms without license.