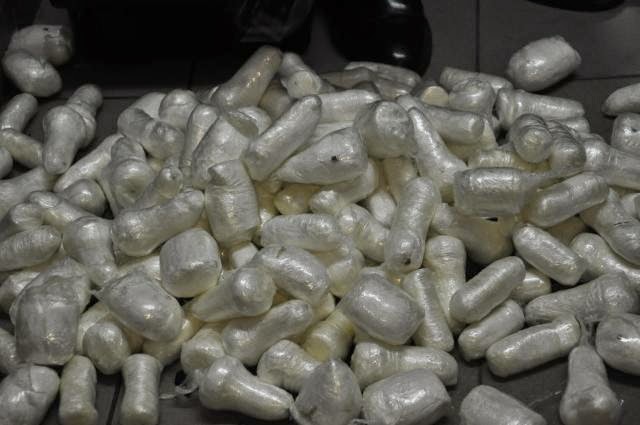 2 Nigerians have been arrested by the officials of NDLEA at Aminu Kano Int’l Airport in Makia area of Kano.

The two were caught with 2.7kg of cocaine drug while trying to pass through security.

According to NDLEA Commander at the airport Ambrose Umoru, the suspects identified as 32-year-old David Ikechukwu and 48-year-old Patrick Otaka arrived Kano aboard Ethiopian Airline Flight # ET 911 with the drugs.

The duo reportedly ingested 2.7 kg of cocaine with street value of over N15 million.

The suspects came into Nigeria from Ethiopia. They first flew to Nairobi where they boarded another flight to Addis Ababa before landing in Kano where they were caught.

David who hails from Orlu in Imo state ingested 60 wraps of cocaine weighing 1.250kg while the other suspect, Otaka from Abriba in Abia state ingested 72 wraps, a total weight of 1.450kg.

“Upon subjecting them to body scanner, it was discovered that they ingested a total of 132 wraps of substances suspected to be cocaine. Investigation into the case is ongoing and they will be charged to court as soon as possible,” Umoru said.

He also revealed that one of the suspect, David Ikechukwu would have died if not for the timely intervention of the doctors on duty who conducted emergency operation on him when the drug burst in his stomach.

Umoru told journalists that the suspects who admitted to the crime blamed frustration and poverty for their actions.