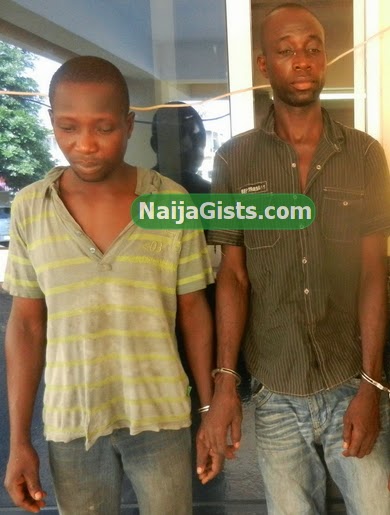 Two Nigerians identified as Obilo Solomon Chigozie and Nande Okafor have been sentenced to a total of 20 years imprisonment with hard labour by a Ghanaian circuit court for stealing GH25,000.

The money belonged to a businessman at Tamso, a suburb of Tarkwa, in the Western Region.

Obilo and Nande pleaded guilty, according to a report by Ghana News Agency.

Prosecuting Police Chief Inspector Edward Paddy told the court in Tarkwa presided over by Mr Samuel Obeng Diawuo that the convicts claimed to be phone hawkers in Accra and residents at Kokomelmle.

He said at about 1100 hours on March 19, the victim John Ardiabah parked his Peugeot saloon car in front of the cluster of stores near the Tarkwa post office and left the money in the vehicle

Obilo walked to the drivers side of the car, unlocked the front door with a key and entered and removed the cash which was wrapped in a black polythene bag and walked off.Prison symbol

Inspector Paddy said as soon as Obilo came out of the car Nande suddenly appeared by his side with a motor bike and he jumped on it to escape.

He said a lotto receiver who was observing the scenario raised the alarm, which attracted other store owners, who attacked the suspects and pushed them onto the ground, before they could get away with the money.

Inspector Paddy said the victims money was retrieved from the convicts and they were handed over to the police.

The Prosecutor said during investigations, Obilo and Nande denied the offence and told the police that they arrived in Tarkwa on the day of the crime from Accra on a motor bike to look for business opportunities.

He said after investigations they were charged with the offence.