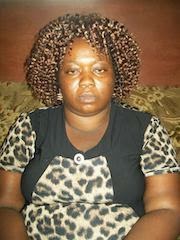 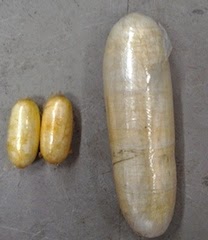 A woman identified as Chinelo Okorom Lynnette has been arrested in Lagos state Nigeria.

The 36-year-old female drug smuggler was caught with wraps of cocaine in her vagina by NDLEA (Nigerian National Drug Law Enforcement Agency) yesterday.

According to NDLEA, the suspect excreted 685 grammes of cocaine at the Murtala Muhammed International Airport while she was under observation following her arrest.

She was arrested during the inward screening of passengers on an Ethiopian flight from Addis Ababa.

Hamza Umar, the commander of NDLEA at MMIA said:

Confession of the female drug smuggler:

“I am a food vendor at Ajangbadi, Lagos and have never been involved in crime. I am a victim of man’s cruelty to man. My husband abandoned me with four children two years ago. I work hard to pay their fees and ensure their proper upkeep. The last straw that devastated me was when the landlord forcefully ejected me. I had nowhere to turn to for solace. I was crying like a baby when a man came to console me. I have never met him in my life. He asked me to wipe my tears and promised to introduce me to importation business. I felt he was God sent until he sponsored my trip to Addis Ababa. When I got to Ethiopia, he told me to take cocaine to Nigeria. Initially I disagreed but he threatened to recover his investment at all cost,”.

Read what Ahmadu Giade, the Chairman of NDLEA said about this arrest:

“Going to Addis Ababa to smuggle cocaine into Nigeria is one of the tricks employed by drug trafficking syndicates. Cocaine is not known to come from Addis but we were able to detect it because of our vigilance. We are prepared to counter the activities of drug kingpins and bring them to justice. We look forward to fruitful progress in our investigation” Giade stated.