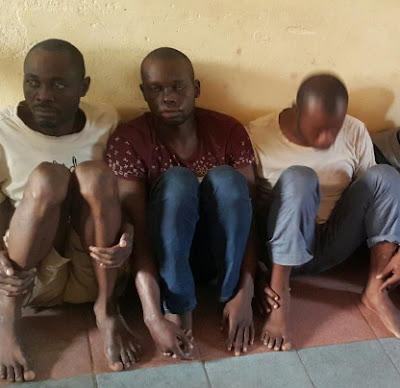 A naval rating and 2 serving police officers have been arrested by the Kogi State Police Command for alleged kidnapping and armed robbery.

Parading the suspects on Monday at the police command headquarters in Lokoja, the Commissioner of Police (CP), Mr. Ali Janga, said the two policemen; Corporals Isiaka Suleman and Ibrahim James have already be charged and dismissed from the Police Force, adding that they will be charged to court, along with the naval personnel, Bature Habila and the fourteen other suspects, after investigation must have been concluded.

The CP said that the arrests within the last two weeks of his assumption of the command was a culmination of pro-active policing and the zero-tolerance approach to criminality under his charge.

One of the dismissed policemen, Isiaka Suleman, while confessing to a role in the kidnapping, said that he was “contacted for the job” by one Francis Alfa, now hospitalized.

“I was serving with Zone 8 (Lokoja) Headquarters when I was moved to the Foward Operation Base (FOB) station in Tafawa Balewa LG in Bauchi when Francis contacted me. When you are caught and arrested, you will be charged to court; I know the consequence”.

Confession Of Evil Housemaid, Girl Witch Who Killed Boss After Sucking Her Blood In Ibadan
Nigerian Lady Who Lost Hand In Ghastly Accident Says She Is Still Thankful