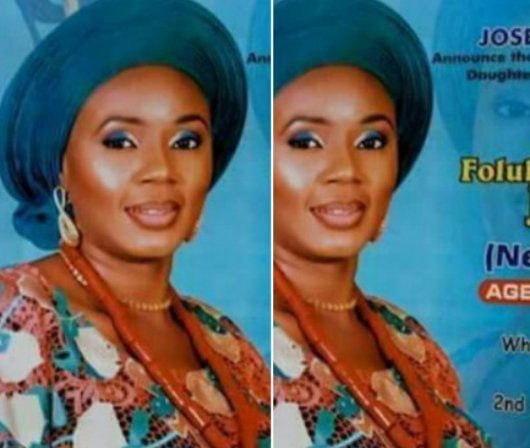 October 9, 2017 – Confession Of Evil Housemaid, Girl Witch Who Killed Her Boss By Sucking Her Blood In Witches Coven At Lagelu Estate In Felele Ibadan

Meet Foluka Olusola Joseph, a 41-year-old wealth woman and mother of three who died last week Monday the 2nd of October 2017 after her 11-year-old housemaid sucked her blood in the witches coven.

Here is what a Facebook user Abiodun Olayinka shared on the social media:

Ephesians 6:12
For we wrestle not against flesh and blood, but against principalities, against powers, against the rulers of the darkness of this world, against spiritual wickedness in high places.

I would have loved to hide the identities of the family but deep inside me I felt I should share the whole scenario not because I have no respect for the family but to use the occurrence to help so many of us that might fall victim and I believe you all would bear with me.

Share the story, warn your wives and entire house of the danger of just bringing into your house a total stranger as housemaid.

It all began on Tuesday night, the 2nd of October 2017, when as usual, Honourable Femi Kehinde, Uncle Segeto and I were all hold up in the hotel discussing. Nocturnal lifestyle has become a norm for me for a while now since I started working with politicians and in the deep of the meeting, Honourable screamed and his countenance suddenly changed from that of a happy man to a crying baby whose mother has just spanked for one offence or the other.

His eyes became soaked with tears all of a sudden and could only muttered few words
‘Please we have to suspend whatever we are doing right now and drive straight to Felele to see Femi’
Uncle Segeto could not fathom the reason but Honourable muttered few strength to explained
‘I have just read on the Facebook the sudden death of the wife of my close ally, Femi or don’t you know Femi ? he asked

We all rushed downstairs straight to Uncle Segun cars, It was sometime around 9 30pm and I knew right there that I may not get back to my house till around 12midnight if not I have to stay at the hotel for the best reasons known to me.

Honourable was fighting to control the tears strolling down his cheeks while explaining to us the relationship between him and Femi which existed for about two decades and I could only nod my heads like that of agama liazard in agreement though I never knew who that Femi is .

After navigating into Bello street at Fellele, Lagelu estate, the abode of the deceased was still at the extreme end of Felele toward Iwo road express way, the house was a bungalow and everywhere was still apparently because of the sad event which occurs at the wee hours of Monday, the 2nd of October 2019.
Two men whom I believe are family members of the bereaved were around to sympathise with the widower, they lay on the floor and later sat on the couch to receive us.

‘Femi, How and when did it happen, for how long have you been on it that you didn’t carry me along, was she sick or what? Honourable Femi Kehinde queried and could not hold back his confusion and anger and hope the news was just a mere rumour.

He mandated the widower to call the Doctor who treated her last, apparently to determine the cause and source of her death probably because ‘Baba mi oo’ as we call the Honourable is a barrister.
Femi, the husband seems not to have come to terms that the love of his life has just said goodbye to him forever yet , he simply replied the barrage of question from the erudite lawyer mildly
‘Uncle, I think this must just be a TV soap or something from a Nollywood act that we watch. He began,
‘ I often watch this kind of storyline in movies and believe its just a superfluous act. I hear these fallacies on radio station and never really believe they are true anyway.
‘how do I begin to explain the mysterious way my wife died from the wickedness and witchcraft of an eleven year old maid who spent barely seven months with us?

‘How can I explain that a child we brought into this house sometimes in April, fed and treated her well could be the cause of the untimely death of my wife who ends up confessing that she has been feeding fat sucking the blood of my wife for that past six months?
This is bizzare

Hmmmm….This is becoming interesting, I laid back and listened attentively to these tales from moonlight. Yea …I’m very spiritual but to be in the thick of the action is not something I experience often.
‘Crime stories are often very interesting because it happens to someone else’, goes a popular adage but the Yorubas would say, Eni Ija o ba , lo npe ara e lokunrin’ another one says Eni Esu o tan, lo nso pe oun gbon’

not until the widower played back both the audio and the visual of the true confession of the witch in question from his mobile device that I began to believe.

Hello doctor, the widower began the discussion and eventually handed the phone over to Honuorable Barrister Lawyer’.

There was no need to strain my ears to listen to their discussion. Femi, the widower already put the phone on speaker and from their discussion, the Doctor said he could not find any cause of her death as he carried out several test on her and gave her the very best treatment andnever found a cause of ailment, he however said she was getting better until she gave up the ghost at about 5am on Tuesday and body already deposited at the private mortuary in Jericho. Only then did we conclude that it was indeed a spiritual attack

How did it happened? I really don’t want to be too forward by getting myself involved to ask question but luckily for me, Femi brought out his phone where both the audio and visual of the girls confession was recorded.

We were all spellbound to hear the damaging confession of the little girl who who was brought into the house by the bereaved sister from Apomu/ Ikire or Asejire axis of Osun state.

Mind you the girl isn’t an idigine of Osun oooo, I learnt probably she is from Benue or an Igede
Bose, (the bereaved sister I believed) was called in to explain how it all happened. According to the husband , Femi who said he had to send the girl packing from his house about 2weeks before the demise of his wife because according to him his spirit could no longer accommodate the girl

‘My spirit has not really been in tune with that girl since she stepped into my house and I began marathon prayers all alone for God to take control and right in the middle of the prayers one midnight I heard a voice to send the girl out of my house if I really want peace in my house, I told my wife that morning and of she went with Bose.

My wife is a very prayerful person I’m just shocked how she had her way because from her confession she said she often laughed at my wife whenever she is praying.

She nearly wrecked havoc in Bose’s home too within the four days she spent with them which shows that God has been with us in the house since.
Bose was startled as she explained.

‘This girl was not the first house maid that would be in this house, I think she is from Benue and we got her in Asejire near Apomu /Ikire but when she came to my house after uncle Femi sent her packing that was when she confessed that she is a witch who has sucked the blood of her madam for six months now.
To be honest immediately this girl came in, we all noticed that aunty was emaciated while the girl suddenly turned cheeky.

Aunty was even joking with her one day that she should please help tell her mates to stop sucking her blood, the girl said ‘alright ma, she will relay her message to the group.

My sister was shocked but none of us took her response seriously not until the fourth day she arrived my home when Uncle Femi sent her packing. I noticed the powdery contents of my baby’s food in her mouth. I thought she stole from not until when my baby started vomiting all the food I gave him then I knew something strange was happening to my baby as I began to scream and descend on the girl

‘What have you done to my baby?’ why is my baby vomiting? I asked while beaten her consistently
She later begged and said she will confess,

‘Confess what?’ Then she began by saying she is a witch and the leader of her group which comprises of about 10 members and that they hold their meetings on the highway.

She said she had tried to kill her baby but because the child his strong willed and God is with him, he vomited all the poison she spilled into his feeding bottle.

The girl continued by saying that she spilled blood into the pap she was asked to prepared for their grandmother and spit on it enough saliva inside the pap for her to drink too.

According to Bose, she said the ‘girl witch’ said she fell in love with the first child of madam w a ten year old boy when she arrived and all effort to make the boy fall in love with her proved abortive

‘Madam’s boy is strong spiritually too, all my efforts in wooing him into our society roved abortive as I usually lure him with snack and biscuit even food from me ,this boy would reject it, that was why in our meeting we decided to feed on his mother’s blood ‘.

Bose said that a day after the ‘ girl witch’ confessed, they noticed that her body was swollen with numerous marks of been beaten badly and when we asked her she said it’s true that she was badly beaten by her group for confessing and before we knew it there were wounds all over her as we returned her to where we took her from.

We pleaded with her to please release my sister and she said there is nothing God cannot do only for her to give up the ghost eventually.

This was more than I could bear and when I was asked to pray for the family, the Holy spirit gave me few messages which I related to them for further prayers

On Friday the 6th of October, we went for the funeral ceremony of Mrs Foluke Olushola Joseph (Nee Paseda) whose obituary you see attached to this story. 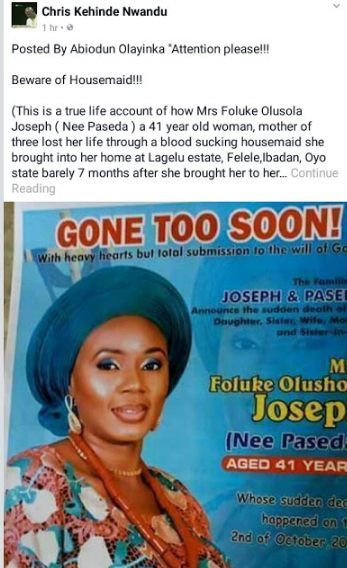 It was a sad event and my prayers is that God should give the family the fortitude to bear the loss.