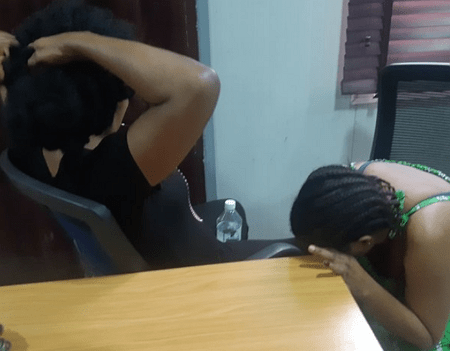 2 sisters Juliet and Chioma (surnames withheld) have been arrested by the National Agency for the Prohibition of Trafficking in Persons (NAPTIP) for allegedly selling their mentally challenged younger sister’s son N350,000.

Also arrested by NAPTIP Lagos command were a pastor’s wife, Efe, and one 45-year-old Mrs. Alabi alleged to have bought the month-old-boy from the sisters.

According to the Nation, the suspects were rounded up on January 30 following a complaint by the siblings’ brother, Chibuzor.

Chibuzor, it was gathered, was worried when he asked to see their sister’s son birthed on January 8 but was told he had been handed over to someone who would care for him.

NAPTIP Commander Daniel Atokolo said it was the fifth time the woman identified as Doris had lost her children to the greed of the people and sad situations around her.

“Many might argue that this is possibly in the best interest of the children, but the agency calls on Nigerians to please explore legal means of adoption as purchase or sale of babies is a crime that is punishable by law.

The illegal avenues also avail unscrupulous elements the opportunity to exploit both helpless young women and their young infants even for ungodly activities such as rituals.

“As the Director-General, Dame Julie Okah-Donli always says, the fight against human trafficking in all her forms is a fight for all of government and all of society. NAPTIP assures Nigerians that we will not relent in our efforts, with all the resources at the agency’s disposal, to ensure a human trafficking free nation.

“The agency as you may be aware adopted a five-pronged strategy to the fight against human trafficking which are Policy, Prevention, Protection, Prosecution and Partnership. The agency has been carrying out sensitisation and enlightenment programmes targeted at market places, schools, motorparks, travel operators and agents, religious institutions amongst others. We are glad to report that this has led to an increase in the number of cases reported to the agency as more Nigerians are now aware of the activities of traffickers.

“We are also glad to inform you that human trafficking issues are now to be covered by school curriculums. The Lagos command from inception to 2019 has recoded 89 convictions. A total of 4,626 victims have been provided various levels of services at the NPTIP Lagos Shelter,” he said.

Answering questions from reporters, Mrs. Efe said she was moved to intervene after she heard stories of a mentally unstable woman who fed her new baby with kerosene at Kirikiri which killed it.

She said when Alabi approached her and narrated her predicaments, she told her she had no idea how adoption was done but that she knew of a family with a mentally challenged sister who was pregnant.

“They told me that she has given birth to five children and because of her condition, she usually left the babies and people will steal them. They said she was pregnant again and they have discussed with their elder brother who said he does not have money for treatment and they needed someone who could take care of her baby. I helped them get somebody and they collected N350,000. They brought the child to my friend here.”

Alabi said she was desperate because her 10-year-old marriage was threatened over her inability to have a child. She said her husband and those around her subjected her to mockery and she was pained over it.

“My home/ marriage was breaking. The pains, the mockery and even the last one I did which was Intrauterine Insemination (IUI), no result. I did not know what else to do and I know I am ageing and need someone around me. I now called this woman (pastor’s wife) whom I have known as a friend and told her I am really going through suffering in the hands of my husband and everyone around me. I do not know how to do it and I don’t have idea, I want to see how I can adopt a child that I can train and have as my own.

So, when I called her and explained everything, she said she did not have any idea but later called me that there was a family with a pregnant sister cannot take care of the child. So, that is how she called me. No, she called around November, that person was still pregnant.

“I just waited. So, during that time they said she may deliver in January, I brought baby things for the child. No, my husband is not aware because he traveled. I just told him I have given birth. I did it such that nobody will call the child a bastard. I was on treatment that made me look pregnant and big. I saw an opportunity and used it. I did not know it will land me here. I am 45 years.”

According to Chioma, Doris gave birth at Juliet’s house to her fifth child and they were worried the fate that befell the last two could be the boy’s lot if nothing was done to save him.

“Doris is my younger sister from same parents. How is it possible that Juliet and I would sell her baby? She is mentally unstable. She was married and had three children for her husband before the sickness started.

It is that Malaria that enters the brain (cerebral malaria). When it began, her husband took two of the children and left. He abandoned her with the third child.

“Later, that child went missing and till date, has not been found. Then, my sister started moving around and got pregnant again. No one knows the father of the baby because of her condition and we were trying to care for the baby only for her to run away with the child one day.

“After a while, she came back to my house and when we asked her of the child, she said she left him with a woman she used to wash plate for. Before we knew it again, she got pregnant for her fifth baby and that was when my sister and I started thinking of a solution.

“We agreed to meet the pastor’s wife for help. We explained the situation to her and told her we want someone who can care for the baby since neither of us have the means. We did not sell the child. She agreed to help look for someone in need of a baby boy and that we, including Doris will be able to see the boy whenever we wanted to.

“So, she later brought N350,000 that we should use it to treat Doris and the money was handed to me in her presence. Juliet was not around and so, I kept the money in the hopes that when she returned, we can go to a mental hospital for Doris’ treatment.

“We also told Chibuzor about it. But unknown to me, Doris went and stole the money, ran to the village and squandered it. She bought phone and other things and when Chibuzor came back, he said he wanted to see the baby and for the woman to sign written undertaken that Doris will take her son anytime she was okay but the pastor’s wife was not forthcoming. That was how problem started and my brother had us all arrested.”