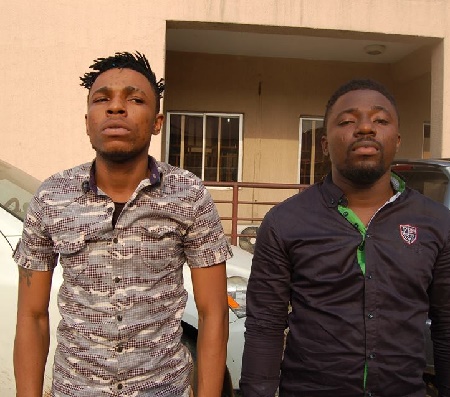 Feb 10, 2017 – 2 Yahoo Boys Arrested In Port Harcourt For Collecting $240 From Briton Though MoneyGram

Investigations revealed that the duo were arrested in their hide-out by operatives of the EFCC in Port Harcourt, Rivers State, based on intelligence reports. Specifically, the suspects were allegedly operating as a syndicate using false identities to deceive foreigners and receive fraudulent sums through Moneygram and Western Union Money transfer from a branch of an old generation bank in Rumuomasi, Port Harcourt.

The accused persons pleaded not guilty to the count charges.

Count one read : ” you Otojareri Governor Lucky ‘m’ (a.k.a) Sam Lewis and Otojareri President Mayor ‘m’ on or about of 8 of May, 2016 at Port Harcourt, Rivers State within the jurisdiction of this honourable Court, did conspire among yourselves to commit felony to wit: obtaining money by false pretence and thereby committed an offence contrary to Section 8 (a) and punishable under Section 1 (3) of the Advance Fee Fraud and Other Related Offences Act, 2006″.

Another count read that : “you Otojareri Governor Lucky, m, (a. K.a) Sam Lewis and Otojareri President Mayor ‘m’ on or about of 8th of May, 2016 at Port Harcourt, Rivers State withinthe jurisdiction of this Honourable court with intent to defraud did obtain the sum of $240.00 (USD) through moneygram from one John Carlson under the pretence that the said sum is an advance fee for the processing of loan from Norton Finance Loans, Springfield, United Kingdom, a pretext you knew to be false and thereby committed an offence contrary to section 1 (1) (a) of the Advance Fee Fraud and Other Related Offences Act, 2006 and punishable under section 1 (3) of the said Act.

In view of their pleas, prosecution counsel, M.T.Iko asked the court for a trial date. However, the defence counsel, B.N.Erhire applied orally for bail for his client but was declined.

The matter was adjourned to 3 March, 2017 for hearing of bail applications while the accused persons were remanded in prison custody.