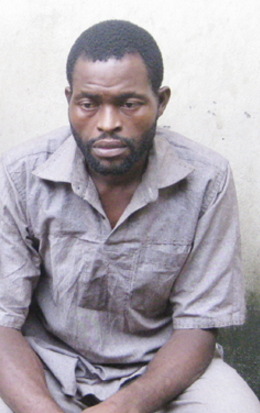 The Imo State Police Command has arrested one Nwabueze Nicholas Lucky for the alleged abduction of a two-year old boy, Somtochkwu Olewu.
It was gathered that the little boy was abducted at the residence of his parents at Zone 4 World Bank, Area in the new Owerri.

According to the state command Police Public Relations Officer, (PPRO) Mr. Andrew Enwerem (DSP), the arrest of the suspect was effected by the operatives of the Anti-kidnapping squad of the command following a tip-off.

“Following a tip-off, the operatives of anti-kidnapping unit of the Command moved into action. That movement produced a positive report, hence the suspect, Lucky Nwabueze, who has confessed to the crime was arrested while the poor boy, Somtochukwu was rescued.

The suspect has been helping the police with more useful information,” he said.

However, Nwabueze who confessed to the crime said that he indulged in the evil act not for ritual purpose but to get money from the father of his victim who lives in China.

The suspect said, “I was going to that Zone 4 in the World Bank Area in search of job. Whenever, I felt like eating something, I would go to the boy’s mother shop. Fortunately, on that day, October 27, 2015 the mother of the boy was inside the shop and the boy was coming out of their compound alone. When I did not see anybody, I took the boy away and joined the next commercial tricycle (keke) to the park, where I boarded a bus to Mbaise”.

The suspect, further revealed that he received an alert of N500,000 in his account a day after the abduction and that it was when he went to collect the money that he was arrested by the police.

According to him, “I kept the boy in my custody, hoping to release him immediately I cash the money. I went to my bank with my ATM card. I collected N120,000 first. After that, the ATM failed to pay. I went inside the bank to ask why. It was then, that I was arrested.”

Mrs. Ifeoma Olewu, mother of the victim said that as her only child for now she felt that her world had crashed for the two days her son was in captivity.
Mrs. Olewu, an undergraduate said that the suspect usually come to her shop to patronise her but that she never knew he had an evil plan.

“The law must take its course. Above all, I am very grateful to the police. I must sincerely thank the Imo State Commissioner of Police and his men, who rescued my boy. They wiped away my tears. May the Lord reward them abundantly. In all, may God Almighty be glorified.”