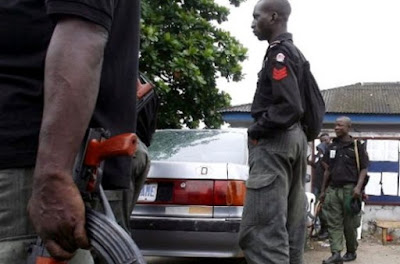 Gunmen in military uniform have abducted seven people at a farm in Epe area of Lagos, Southwest Nigeria.

We gathered that about 20 gunmen stormed the Kodjo Farm, located at Igbodu, Epe area on Sunday and abducted seven people.

One of the victims is Kakaja Joseph, a 65-year old man, four poultry workers of Kodjo Farm and two travellers.

The guard and four poultry workers were abducted after the kidnappers attacked Kodjo Farm. But the two travellers were taken after the militants embarked on a second operation, which witnessed them blocking a transit road.

Eye witnesses said that the gunmen stormed the poultry at about 8am on Sunday and shot several times in the air and took away their victims in a waiting boat while they took away several chickens and eggs.
The kidnappers, armed with sophisticated guns, allegedly blocked a road along Igbodu, where they engaged law enforcement officers in a gun duel.

People were said to have scampered into the bush in different directions. Many of them were also alleged to have spent the night in the bush.

According to a poultry worker who craved anonymity, “After kidnapping the poultry workers, the gunmen went to Molajoye Expressway and kidnapped two travelers. Some of the occupants of the bus sustained injuries.”

On November 15, gunmen, numbering over 40, had invaded a farm settlement in Epe, also located on Igbodu-Isiwo Road, Lagos and kidnapped four farmers.