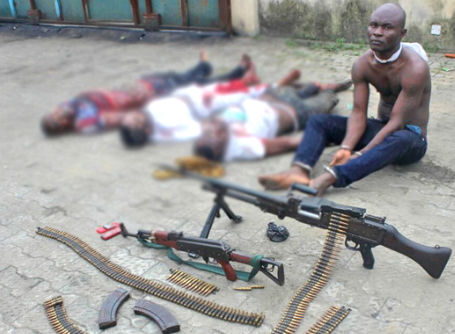 3 suspected robbers were yesterday killed by NPF officials during a shootout with some dare devils on a robbery mission at UTC Junction in Port Harcourt Rivers State.

One of the hoodlums, who escaped being killed by a special intelligence team from the Inspector General of Police, said they had planned to attack a plane belonging to Arik airline.

While queuing behind other vehicles at a traffic light, the robbers reportedly ran out of patience as one of them alighted from the car and opened fire on some policemen at UTC junction.

While they were trying to escape from the superior fire power of the policemen on duty, 3 of robbers were gunned down while the 4th sustained gunshot injuries.

This is what Rivers State Police spokesperson Nnamdi Omoni said on the attack:

The injured suspect identified as Peter James reportedly confessed to being a part of a killer gang who killed a police officer during the last APC rally in Okrika.