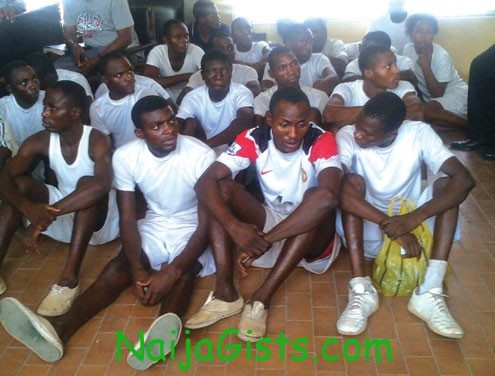 The above cops were alleged to have made false statements to recruiting police office. The newly recruited police officers have been arraigned in Ikeja magistrate’s court for certificate forgery naijagists.com

The new cops Twenty-three newly recruited policemen have been arraigned before an . They were holders of National Certificate in Education (NCE) and National Diploma (ND) from various educational institutions in Nigeria.

Part of the one count charge brought against them reads: “ That you, all of the above names persons on or before 17 September, 2011 at Police College, Ikeja, Lagos in the Ikeja magisterial district did make false statement to the recruiting officers that you were National Certificate in Education (NCE) and National Diploma (ND) holders from various institutions in Nigeria, knowing full well that you never possessed the qualifications claimed, which made you to be recruited into the Nigerian police force.”

According to the prosecuting police officer, ASP Barth Nwaokoye, the alleged offence committed by the newly recruited police officers are punishable under section 96 of the Criminal Code, Vol. 44, Laws of Lagos State of Nigeria, 2011.

The 23 officers however pleaded not guilty to the charge.

They were later granted bail in the sum of N100,000 with two sureties by the presiding magistrate, Mr. A.O. Isaac.

The matter has been adjourned till 18 April, 2012 for trial.

This is the fastest route to jail anywhere in the world!