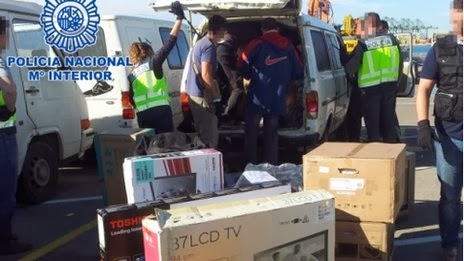 Police in Spain have arrested 25 people in connection to a sex-trafficking ring that brought women from Nigeria to work as prostitutes and internet scammers.

The group specializes in using stolen or fake credit cards to buy high end designer goods that were loaded in vans, welded and sealed with silicone and then sent by ship to Lagos, Nigeria. The women allegedly lured with the promise of good jobs in Europe, were first flown to Mexico or Brazil, travelling on false identity documents. From there, they were flown to Paris, then smuggled into Spain to work in the sex trade, police say. Five women who were victims of the sex ring were freed in the raids.

According to BBC, Police found one member of the gang performing an abortion on one of the five women. Arrests were made across Spain – in Madrid, Toledo, Cantabria and Palma de Mallorca. More than 100 vans concealing luxury goods were also seized. The gang used the vans to launder their profits and send them back to Lagos, police say.

The vans, with dark-tinted windows and welded doors, were stocked full of beer but had luxury items hidden deeper inside. Goods worth an estimated €5 Million (£4.1M – $6.6M) were found in 94 vans seized in Madrid and another 26 in the port of Valencia, including high-end televisions and cases of alcohol. Police say the investigations began in October 2012, following the complaint of a Nigerian who had been attacked by several people of the same nationality in the Madrid suburb of Fuenlabrada. The National Police identified the alleged attackers, who may be engaged in a criminal plot far-reaching.

It took several months of investigations for the police to discover the activities of these individuals, members of an organized group mainly settled in Madrid, Toledo and the Balearic Islands. The branch in Spain was itself part of an international criminal organization, formed more than 20 years ago in Nigerian universities and it was dedicated to a wide range crime; from scams by fraudulent use of cloned credit cards online, the “Nigerian letters”, forgery to trafficking humans.

Out of the 25 suspects, 8 are illegal immigrants in Spain.