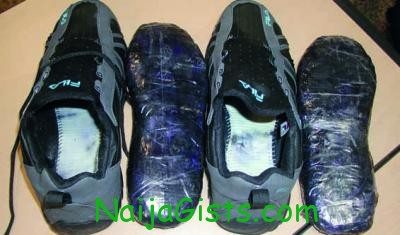 For allegedly concealing a reasonable quantity of cocaine in the sole of his shoes, a returnee from Brazil named Martins Anuo, 25, may be prosecuted.

Anuo was caught on Jan 9, 2012, in the thick of the anti-fuel subsidy removal protests, with 1.500 kg of cocaine at the Murtala Muhammed International Airport, Lagos.

During a search on him, officials of the National Drug Law Enforcement Agency discovered that he had hidden 500g of the substance in the sole of his shoes and about 1kg in his hand luggage.

Anuo, who arrived at the airport aboard a South Africa Airways flight, was promptly arrested by the National Drug Law Enforcement Agency officials. He is the first suspected drug courier to be arrested at the airport in 2012.

Reacting to the arrest, the Chairman of the NDLEA, Ahmadu Giade said, “The calculation of the drug cartel was to take advantage of the strike action to import cocaine into the country. We successfully detected the drugs and arrested the suspect. The agency is prepared to handle such emergency situations.”

Giade told CRIME DIGEST that before the strike, his men were directed to remain vigilant, proactive, and abort every plan by drug barons to smuggle narcotics into the country.

“It took careful screening on our part to have detected the drug. During the search, we uncovered 500g of cocaine in the sole of the shoe he wore. Further careful search led to the discovery of 1kg also of cocaine in his hand luggage. The arrest took place at about 2200 hours on Monday night Jan 9, 2012 the first day of nationwide strike action,” top NDLEA official said.

Anuo said hardship forced him to accept an offer of N500, 000 by the drug cartel to ferry the drugs to Nigeria.

He said, “I travelled to Brazil in 2009 in search of greener pastures. I’m a petty trader in that country I’m married to a Brazilian woman, who is pregnant and we are expecting our baby in a few months. My problem is that I do not have money to take care of my family. Besides, I have not been able to visit Nigeria to see my relatives.

“It was in the process of trying to get funds that I was offered the drug deal. They offered me a return ticket to Nigeria and half a million naira upon successful delivery of the drugs. Although I made a mistake, it was aimed at solving my financial problem.”

Continue Reading
You may also like...
Related Topics:man caught with cocaine in shoe