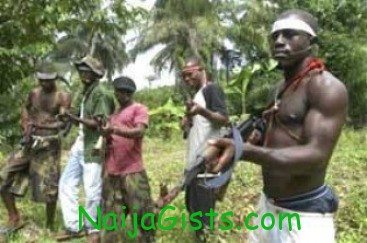 Not less than five people were shot dead yesterday following a clash between two rival cult groups, the Eiye Confraternity and the Buccaneers. naijagists.com

We learnt that a member of Buccaneers was allegedly killed by the Eiye Confraternity.

The Buccaneers in their bid to avenge the death of their member, stormed Onikolobo area of the state, adjudged to be the stronghold of the Eiye Confraternity and engaged them in a gun duel.

According to a witness, the gun fight which lasted for hours at the Onikolobo area of the town, left five people dead after it ended.

The area has now been deserted as students and indigenes are scared of more reprisal attacks.

All efforts to speak with the school’s Public Relations Officer proved abortive as his call was not going through as at the time of filing this report.

The State Police Command PRO, Muyiwa Adejobi, confirmed the incident and said they have restored normalcy in the area.