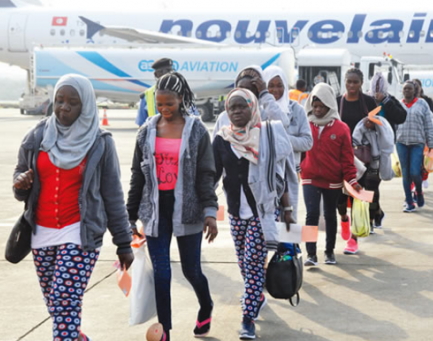 The Director General of NEMA, Alhaji Mustapha Maihajja, received a fresh batch of 257 Nigerians who arrived from Libya  today Thursday the 28th of December 2017.

Maihajja lauded the International Organisation for Migration (IOM) for their efforts at continuing the repatriation exercise even during the festive season.

The DG who was represented by the Southwest Coordinator of NEMA, Alhaji Suleiman Yakubu, enjoined the returnees to join hands with various government agencies to tackle the problem of human trafficking in the country.

NAN reports that the new returnees arrived the Cargo Wing of the Murtala Muhammed International Airport, Lagos at 6.05pm aboard an Afriqiyah Airbus A330-300 with Registration number 5A-OMR.

They comprised 152 adult females, 82 adult males, nine children and 14 infants, with one having a medical case.

The returnees arrived barely 24 hours after another batch of 157 Nigerians landed in the country from Libya where they had been stranded enroute Europe.