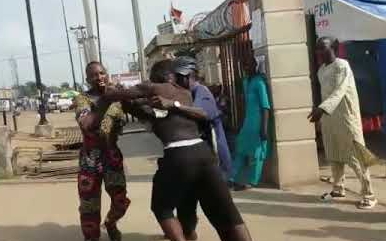 December 29, 2017 – Bus Conductor Beats Up Colleague, Knocks Out His Teeth In Apapa Lagos

Mr Rasheed Balogun, a bus conductor who allegedly beat up a fellow conductor and removed three of his teeth, has been granted bail by an Apapa Magistrates’ Court.

Magistrate M.A Etti said the sureties should be gainfully employed and should show evidence of two years’ tax payment to the Lagos State Government.

Balogun, who lives at Amukoko, Apapa, Lagos, is facing a two count-charge of assault.

The complainant, he added was also injured on his lower lip.

The prosecutor said the fight started after the duo had an argument over money.

He said efforts by some pedestrians to settle the dispute failed.

Kokoye said the complainant reported the case at the police station and the accused was arrested.