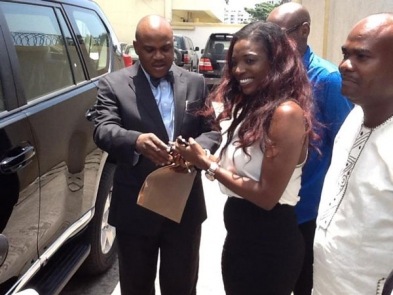 Last Friday during the traditional wedding ceremony of 2face Idibia and his wife in Eket, Akwa Ibom state, the governor of the state, Godswill Akpabio presented the couple with two brand new Toyota Prado SUVs as their wedding gift.

Hours after the controversial announcement by Akpabio, critics blast him for wasteful spending.

They claim he is making the rich richer instead of helping the poor people in Akwa Ibom State.

To cut the long story short, Tuface and his wife have accepted the controversial wedding gift from Akwa Ibom’s Information commissioner, Aniekan Umanah.

The couple plan their white wedding for next week Saturday, March 23rd in Dubai.

Nigeria is indeed a country where the rich get richer… there is no doubt about that…. #Olowo laye mo thingz