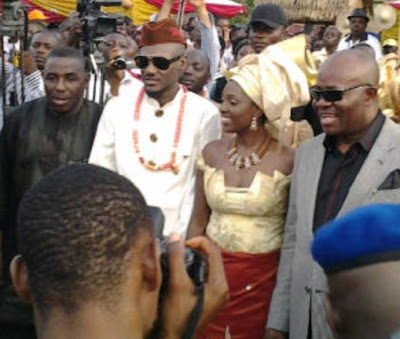 Uk-based photographer Emmanuel Okolo, the CEO and owner of Pailonmexy Studio who captured the key moment in the glamorous wedding ceremony of singer 2face Idibia and his wife Annie Macaulay has filed a major lawsuit.

Okolo said Annie Idibia ordered him to submit the high resolution images he took immediately to a woman Ms Chineze Anyaene without payment.

The plaintiff said, he was reluctant at the beginning since the offer was coming through a third party, but later accepted after he was convinced that the offer was actually with the blessing of the first defendant.

Annie Idibia was said to have later contacted the photographer after the wedding and demanded for the printing of 10 of the high resolution pictures taken.

In the huge lawsuit, Okolo is demanding for N100m in damages and 20 million in exemplary damages.

A court date has been fixed by Justice Mohammed Idris of the Federal High Court in Lagos.

Their hearing held earlier this week and the 16th of October has been picked for trial.