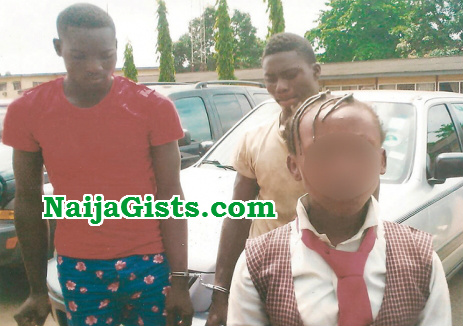 Already, the police have arrested two of the students while the third suspect in crime is said to have absconded.

The suspects allegedly committed the crime after luring the little girl from a makeshift store within the school hostel, while her mother was away.

Following the discovery, the victim’s mother promptly reported the incident at the Aideyan police division, which led to the arrest of the two students, while the third suspect allegedly absconded.

Besides, the incident was also reported to the Principal of the school and the Edo State Commissioner for Health.

A source close to the family of the victim told journalists in Benin that the tHe girl is currently receiving treatment at An undisclosed medical facility.

“The little girl said that when they (suspects) took her there (hostel), they tied her hands and mouth. But she was able to identify the three of them,” the source said.

Principal of the school, Mabel Omobude, who confirmed the case while speaking to journalists on phone, said the case has been reported to relevant authorities for further investigation.

“Yes, we are aware. The case was reported to the Director of Nursing Services. The Commissioner of Health is aware.

“She wrote a letter to the Commissioner of Health which was sent to my director to investigate. That was just Thursday and we have started our own investigation,” she said on telephone.

Also commenting on the incident, the Coordinator of Child Protection Network, Ms. Jennifer Ero, while calling for stiff penalties for the suspects, noted that the mother of the girl had been subjected to intimidation for reporting the case.

“Because she owns a shop there (in the school hostel), they are threatening to eject her because she went to the public with what happened. They want her to keep silent over it,” Ero said.